The 2016 Masters: This One could be a Shootout!

The time has come again for one of the biggest tournaments in golf: the Masters. And this edition is gearing up to be something extra special. For the first time in years, dare we say decades, there will be an eagle-infested duel on the golf course among the industry’s best players for a major championship. Why so confident? Because not only did golfdom hatch a Big Three in 2015 among Jordan Spieth, Jason Day and Rory McIlroy, but 2016 has spawned its own Big Three with Bubba Watson, Adam Scott and, yes, Phil Mickelson.

Mickelson won three green jackets in the age of Tiger Woods but the two never duked it out on Masters Sunday. For their part, the Big Three have produced no stirring on-course battles either. As McIlroy, Spieth, and Day jostle for the World Number One ranking, they take turns winning but are rarely in contention together. Heck, most times it seems like they aren’t even playing in the same tournament.

But this time? This time will be different.

Jason Day has finally gotten hot. Back-to-back victories at the Arnold Palmer Invitational and WGC Match Play have vaulted him back to World Number One. But Day continues to be dogged by ill health. The vertigo that felled him in last year’s U.S. Open hasn’t returned, but his back problems at the Match Play were so acute he barely finished some early round matches. And since his last win, he suffered from “flu-like symptoms” that caused him to lose 11 pounds.

But at least Day is on form. Since winning the first event of 2016 at the Tournament of Champions where he just about birdied every other hole, Spieth has been a non-factor. Still, after his epic win at Augusta in 2015, Spieth is drawing the big money going into the Masters. Pay no attention to his sitting at 13th in the FedEx Cup standings, and that 13 other golfers this year have more Top Ten finishes than his three. And Rory McIlroy? He still has more talent than any one on the planet. Don’t let that 36th ranking in the FedEx Cup standings fool you. This could be a Masters shoot-out. 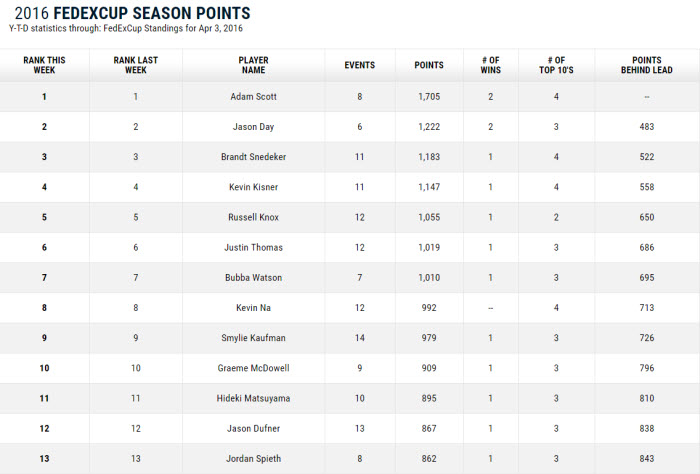 Back in February, Bubba Watson took apart the field at Riviera to win the Northern Telecom Open. That is until Adam Scott did, and won back-to-back at the Honda Classic and Doral. And Phil Mickelson seems to be in the mix every week, up until a bad hole or the important missed short strokes with the putter. These guys have forged their own Big Three for the past-thirty set. All have won green jackets in the past, six in total among them.

Of course, recent history tells us otherwise. Dustin Johnson has been playing well enough heading to Augusta to believe that he could atone for his messy ending to the 2015 U.S. Open. Rickie Fowler has been itching to make it a Big Four among the twenty-something set, and so has Patrick Reed, with five Top-10 finishes in 2016. And the sweetest swing in golf, that of Louis Oosthuizen, has been producing results of late as well.

Yes, history tells us that great golfers don’t usually all fire at once. Each year at the Masters one golfer tends to emerge early as player of the week, and the winner is almost always in the final foursome. But until that happens we’ll be excited about the chances for a real Sunday shootout for the green jacket.