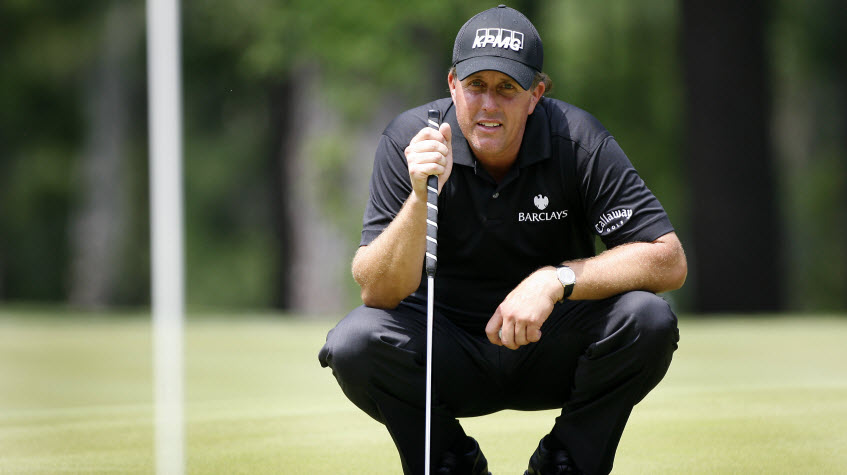 Tiger Woods took over from Jack Nicklaus as his generation’s greatest golfer – the one who fellow players watch with awe. Phil Mickelson, on the other hand, has assumed the legacy of Arnold Palmer as the player who the fans love to watch play. Like the King, if there’s a safe route to the green, Phil doesn’t want to hear about it.

The gambling, go-for-the-pin approach to the game is what has defined “Lefty” for his 23 years and counting on the PGA Tour. Mickelson will likely always be remembered for his “Live by the sword, die by the sword” mentality. Sometimes it works, sometimes it doesn’t. It didn’t work when he decided to pull out his driver on the 18th tee of Winged Foot in the 2006 U.S. Open with a one-stroke lead, and whacked it out of bounds. But the blast with his 6-iron from the pine straw of the 13th hole at Augusta National in 2010, which flew through the trees across Rae’s Creek on the final day of the Masters to set up Phil’s third green jacket, will live in infamy.

Philip Alfred Mickelson, the son of an airline pilot (it was Arnold Palmer who popularized the routine of top pros flying their own airplanes to tournaments), grew up in San Diego. The player who would become by far the greatest left-handed golfer of all time is actually a natural righty. He learned his golf by watching his father swing, and to do the same thing as dad meant swinging lefty. Philip Mickelson (Sr.) built an elaborate practice area in the family backyard for his son, and from the hours spent there came golf’s most celebrated short game. When he was ten years old, young Phil captured the championship for his age bracket in his hometown. Then in 1984, he lost the Junior World Championship to a golfer by the name of Ernie Els. Of course, that’s no shame, as Ernie went on to when 4 majors and many titles worldwide. 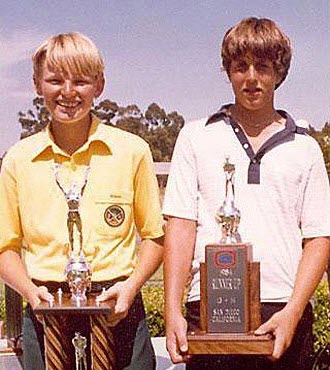 Mickelson was already famous by the time he joined the PGA Tour at the age of 22 in 1992. In 1990, he had become the first left-handed golfer to win the United States Amateur Championship. As an undergraduate at Arizona State University, Mickelson won the NCAA Men’s Individual tournament as a freshman, sophomore, and senior, joining Ben Crenshaw as the only three-time winner of the event. Unfortunately, a final round 75 on Poppy Hills Golf Course on the Monterey Peninsula, cost him a historic fourth championship in his junior year.

However, it wasn’t that stellar collegiate record that put young Mickelson on the map, but rather another achievement during his junior year. In January, playing as a 20-year old amateur in the Northern Telecom Open in Tucson, Mickelson birdied the 72nd hole to win the professional tournament by one stroke. He was the sixth – and to date, last – amateur to capture a Tour title. 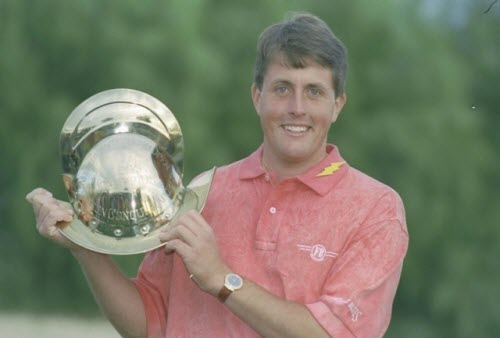 Since then, Mickelson has added 41 more tour titles – only eight players have ever won more. Included in the total are five major championships, although oddly he waited a dozen years and almost as much heartbreak before winning his first – the Masters in 2004. Many of those near misses have come in the U.S. Open, where Phil has signed for a second place finish a record six times. His fifth major, the Open Championship, came at Muirfield with a scintillating 66 in the final round – after he had already been voted into the World Golf Hall of Fame. Another oddity to his career is that although Phil Mickelson has been ranked in the Top 10 of the World Golf Rankings for over 700 weeks (the equivalent of 14 years), he has never been the World Number One.

His fans follow Phil almost with as much intensity off the course as on, as his wife Amy is one of the most popular figures on tour. The two met at Arizona State where she was a student who moonlighted as a Phoenix Suns cheerleader. Their first date was to play tennis, and when Phil confessed he was a professional golfer she assumed he worked in a pro shop. She has since learned otherwise.

When Amy was pregnant with the first of the three Mickelson children during the 1999 U.S. Open, Phil kept a plane on the ready and a beeper on the course, prepared to leave in mid-round if need be. He led the tournament by a stroke with three holes to play but lost to Payne Stewart on the final green, but his first daughter, Amanda Mickelson, arrived at 6:00 p.m. the next night. In 2009, Amy was diagnosed with breast cancer, as his mother Mary would be months later. The golf world followed the family’s travails as Phil took time off from Tour, and then came back to score an emotional win in that 2010 Masters. 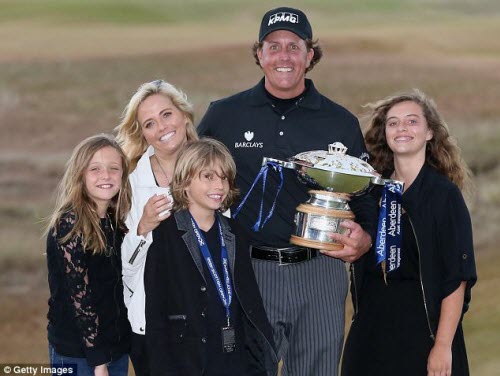 Phil Mickelson and his Family in 2013, image: dailymail.co.uk

The mid-2010s were rough years for Phil Mickelson. There were no wins anywhere from 2014 to 2017. However, only a handful of players have won a PGA tournament at Phil’s age. Many of the bright young stars on the Tour are a quarter-century younger than Mickelson.

Yet, would anyone be surprised if Mickelson won another major – maybe even a United States Open to complete a career Grand Slam?

Phil has certainly ignited the hopes of his fervent fans even during his winless years. There was his unforgettable Open performance at Royal Troon in 2016 when he set the course record with an opening round 63. He lost the tournament in a duel with Henrik Stenson who shot his own 63 on Sunday to Phil’s 65. Mickelson’s total of 267 was the lowest score in a major championship never to win. Mickelson already held that dubious mark with a 266 in the 2001 PGA Championship.

Mickelson played well enough throughout 2016 to make the United States Ryder Cup team where he was much more than a cheerleading elder statesman. He collected 2.5 points on a 2-1-1 record to help the Americans re-take the Ryder Cup. 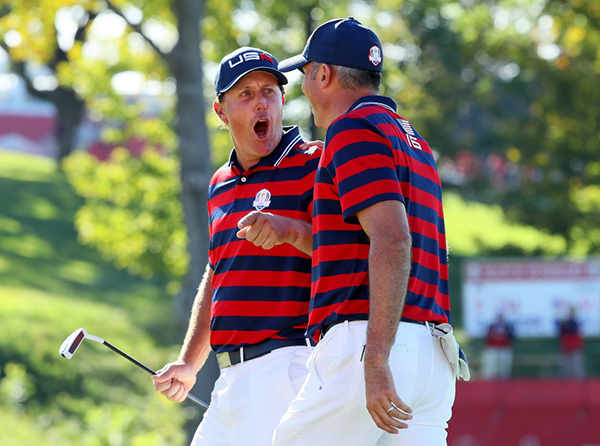 Phil Mickelson and Matt Kuchar on the Tenth Green at the 2016 Ryder Cup, image: golfdigest.com

2017 was a lost year for Phil Mickelson. He never made it to tee at the U.S. Open as he attended his daughter Amanda’s high school graduation instead. He missed the cut in the season’s last two majors. Then, he parted ways with caddie Jim “Bones” Mackay who had been on the bag for all 41 of Mickelson’s PGA titles.

The Phil Mickelson news from 2017 was not all bad. That year he continued to perform on the international stage with a 3-0-1 in his matches at the Presidents Cup. 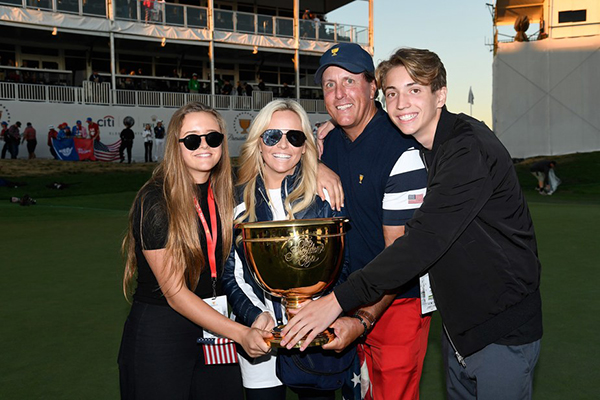 Phil Mickelson and Family with the Presidents Cup, image: golfdigest.com

Michelson’s performance decline has not been the result of weak ball-striking. Rather, his once legendary putting and short game have deserted Phil at critical moments. While it is unrealistic to expect an older golfer to putt like he did when he was 22, no one should count Phil Mickelson out on any given week at any age.