This edition of the Player Spotlight we will be covering the life and career or Jordan Spieth. For many years, the only notoriety the John Deere Classic had on the PGA Tour was due to its unfortunate spot on the golf calendar the week before the Open Championship, so most top players skipped the Illinois event. 2015 Tournament organizers scrambled to make their event more appealing; they handed an exemption to Michelle Wie to play in a men’s event, and they chartered a flight directly to Great Britain after the final putts on that Sunday night in an attempt to gain more players.

The John Deere Classic changed in 2013 when a University of Texas dropout (and 120th-ranked player in the world at the time) named Jordan Spieth, holed a bunker shot on the 72nd hole to force his way into a playoff with defending champion Zach Johnson and Canadian, David Hearn. Spieth won the tournament with a par on the fifth extra hole, and at age 19 became the youngest PGA Tour winner ever.

In 2015, he became the FedEx Cup champion, and he’s also recognized as a three-time major winner in the golf world. The former world number one was listed in 2016 by Time Magazine as one of the top 100 most influential people. The publication wrote that Jordan “exemplifies everything that is great about sports.”

Spieth was far from unknown in golf circles before his breakthrough at the TPC Deere Run. He had played in his hometown Byron Nelson Championship in Irving, Texas when he was 16 years old and finished 16th. He was a low amateur in the U.S. Open and, before that, Spieth had won two U.S. Junior Amateur titles. The only other person to win more than two is Tiger Woods.

Nevertheless, despite the glittering teenage golf resume, the golf world was not panting for Spieth’s arrival as it had been for Woods two decades earlier. Even the win at the John Deere Classic did not lead golf headlines that week – Phil Mickelson’s dramatic playoff win in the Scottish Open cast a news shadow over Spieth’s heroics. Although his gifts are evident to the trained golfing eye, there is nothing about Spieth’s game to make casual onlookers drop their jaws in awe. Instead, he is a remarkably solid player in every aspect of his game. 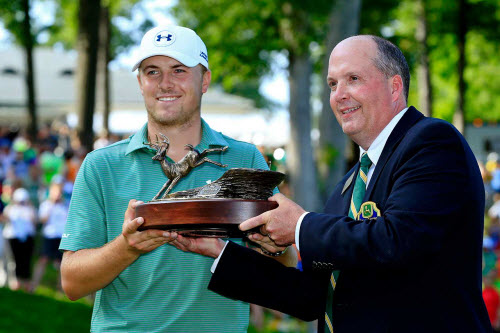 The 6’1″ Spieth is cut from the same corporate country club cloth that drapes most of the PGA Tour. For the average fan, Spieth differentiates himself from the current crop of young guns mostly on the leaderboard. Poised beyond his years, Spieth is deeply rooted in family values—grounded in the special needs of his younger sister, Ellie, who was born with a neurological disorder. Watch this video that outlines the special relationship he has with Ellie:

Spieth went on to make the 2013 Presidents Cup, and snagged PGA Tour Rookie of the Year honors, but the non-golfing world got its first dose of Jordan Spieth at the 2014 Masters when he shared the lead after 54 holes. His bid to become the youngest Masters champion ever derailed over the back nine and he settled for youngest-ever runner-up honors.

At the same time, Spieth also set up the Jordan Spieth Family Foundation, using his younger sister as an inspiration to create a charity that provides awareness-boosting campaigns and financial assistance to families with special needs, military families, and those investing in youth golf.

For the rest of the year, while Rory McIlroy hypnotized golf fans by winning the Open Championship and the PGA Championship, and others trundled off to follow the continuing soap opera of Woods’ comeback travails, Spieth went on a record-setting birdie binge in obscure, off-the-radar events that served notice of something special in 2015. He won the Valspar Championship and pulled himself to Number Six in the world.

Spieth then electrified Masters onlookers by racking up 28 birdies and reaching 19 under par at Augusta, numbers never before seen. His play at the U.S. Open was more solid than spectacular, but when Dustin Johnson self-destructed on the 72nd green, he had that title as well. In a matter of months people shifted from talking about the Rory Slam to a real Grand Slam. Naturally, sponsorships accompanied his phenomenal success, including ones from Titleist, Under Armour, SuperStroke Grips, Rolex and NetJets.

Spieth’s first true major win came in the 2016 Master’s tournament, where he earned $1.8 million, and shot a (-18) or 270. He tied with the 72-hole record that was set by Tiger Woods in 1997, and also became the second youngest player, behind Woods to win the Masters.