As much as the golf media tries to gin up excitement for a Big Three – or even Big Four – the “graybeards” on Tour in their thirties just keep mucking up the hype machine. This past weekend at the Honda Classic was more of the same.

Meanwhile, Big Four member Rickie Fowler spent a bogey-free Thursday and Friday crafting a pair of 66s and looked to be running away with the tournament until he became ensnared in the Bear Trap at the PGA National at Palm Beach Gardens, Florida, and was not a factor on the weekend. Instead it was Sergio Garcia and Titleist spokesman Adam Scott – two mid-thirty something’s who were veterans of the very same hype machine in their twenties – who were left to battle for the title before Scott won out. He now has more PGATour wins, 12, than any other player under the age of 40.

A dozen years ago, when Adam Scott became the youngest player to win The Players Championship it seemed inconceivable that Garcia and Scott would now own between them only one major. Garcia is a consummate ball striker and Scott possesses one of the game’s prettiest swings. But all too often the play around the green of both players has been their undoing.

In his twenties, Scott scored seven PGA wins, rising up to swamp the field just often enough to remind everyone of his prodigious talent. But his record in majors was a complete non-starter: 14 missed cuts balanced by only four non-contention top ten in 39 tournaments.

Scott famously addressed his putting woes by adopting the broomstick putter in 2011. The long putter has not always been a panacea, however, as witnessed in the 2012 Open Championship when he led by four strokes with four holes to play, and bogied his way to a second place finish behind Ernie Els at Royal Lytham & St. Annes. However, he has racked up eleven top ten finishes in the majors, including winning a green jacket in the Masters in 2013 by sinking Angel Cabrera in a playoff.

Poster Child for the Belly Putter

If ever a golfer had the make-up to withstand that sort of collapse, it’s Adam Scott. He learned the game in Australia from his father Phil, a member of the Australian PGA who designed and built golf clubs. Young Adam first whipped his dad on the course at the age of 13 and eventually landed at the UNLV to play golf. His professional odyssey began in 2000.

Sharing the same name with comic actor, Adam Scott, from Parks and Recreation. The latter, the easy-going Aussie golfer has always been able to laugh off, and the fact that he favors surfing as an off-course activity sums up Scott’s general attitude towards life. Even as he pulled himself to World No. 1 in 2014 for eleven weeks, Scott was still known mostly for his use of the long “old-guy” putter as it became banned for professional play. 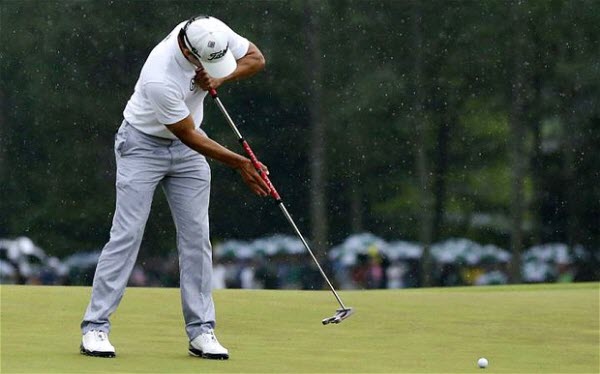 As the most recognizable employer of the long putter on the PGA Tour, however, Scott was forced to deal with speculation as to his career prospects without the belly putter. When it came time to surrender the broomstick he once used to make a living, Scott impishly sent one as a retirement gift to outgoing Royal & Ancient head Peter Dawson.

With his win at the Honda, where he led the field in approach-putting proximity with a conventional putter, Scott has put to rest the belief that the anchored putter was the sole support for his game. Rather, his name can now be added to the list of Masters favorites right along with those hot-shot twenty-something’s.