Billy Horschel: $13.5 Million In Less Than A Month 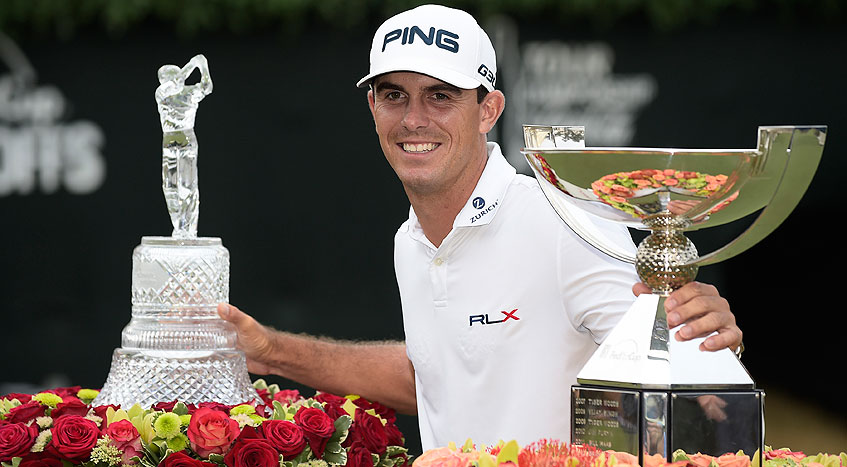 If you had told Billy Horschel before the start of the 2014 FedEx Cup Championship series that he was about to embark on a $13.5 million dollar run, he probably would have thought you were crazy. After all, he was in 69th place at the start of the series, and no player had ever won the championship that started below 19th place. And, if you had told him the same thing after he dropped to 82nd, costing him The Barclays – the first leg of the playoffs – he probably would have thrown his PING golf clubs at you and recommended that you be fitted for a straitjacket.

But like all great comeback stories, Billy Horschel had to begin the series toward the bottom of the pack before making a triumphant run to the top, all in just a few short weeks.

It all started after this younger player was cut from The Barclays after bagging a couple of 73’s in the first two rounds of the tournament, leading many to pass over this promising athlete. However, unknown to Horschel and the rest of the world, the best golf of his life was just around the corner.

With an impressive showing during the first two rounds of the Deutsche Bank Championship at the TPC Boston, Horschel had a chance to take the win from Chris Kirk, who ended up out-besting the competition when Horschel stumbled on the last hole of the last round of the tournament. Disappointingly, his “chunk shot heard round the world” on the par-5 fairway of the 18th hole cost him a playoff at the least – and possibly the win. However, Billy Horschel’s final score of -13 under par earned him nearly $600,000 for the Labor Day Weekend, and things only got better from there.

Coming off of a terrible shot on the last hole of the Deutsche Bank Championship a week prior, Horschel proved that he doesn’t let the small things bother him, even if those minor mistakes end up costing him a tournament win.

Billy took his blunder in stride:  “I don’t dwell on things that are bad.  It rolls off my shoulders, [I’ve] got a thick skin… I look at the positive, I’m a positive guy.  The sooner you get over it, the sooner you can move on.”

Billy’s positive outlook served him well during the BMW Championship, allowing him to take home the trophy while besting stiff competition from the likes of Bubba Watson and Morgan Hoffmann, among others. Held in the shadow of the Rockies, this tournament awarded Horschel a big check worth over $1.4 million.

Horschel must have been on cloud nine by the time he arrived in the unseasonably cool Atlanta air for the last tournament of the 2014 FedEx Cup Series:  The Tour Championship.

So how much did the last hurrah of the series affect his bank account?  Horschel took home over $1.4 million with his first Tour Championship win, along with a $10 million bonus for the FedEx Cup.