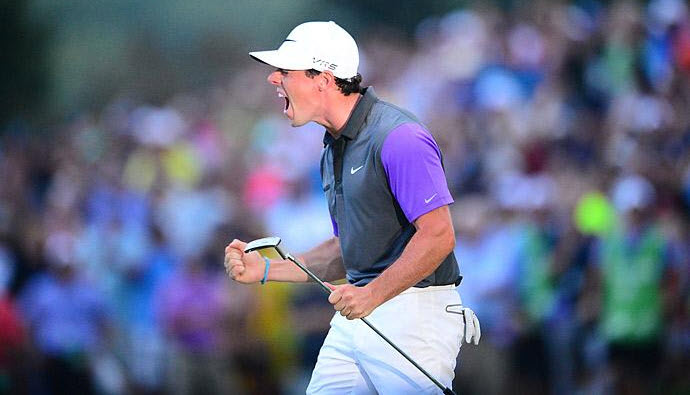 After a few years of bouncing between good and great, we find Rory McIlroy ranked as the number one player in the world. It began at The Open Championship, where he came out on fire and continued to run away with the field. However, there seemed to be an uneasiness among spectators and fans alike, as Rory has found a way in the past to come unraveled. But that wasn’t to be the case as he finished two shots better than Sergio Garcia and Rickie Fowler to take home the Claret Jug.

Following a rain delayed third round at the World Golf Championships-Bridgestone Invitational, McIlroy calmly birdied holes 17 and 18 to get into the final pairing with leader Sergio Garcia for the closing round.

Although he spotted Garcia, the world’s number five player, a three-stroke cushion going into the final round, McIlroy opened up with 3 consecutive birdies. Then, following one miscue, Garcia soon found himself trailing Rory on the leaderboard. Yes, that’s how fast it happens these days with McIlroy. As we know, Rory pressed on the gas and Garcia would never recover.

McIlroy entered the week at Valhalla Golf Club the clear favorite to take home the coveted Wanamaker Trophy. But even with his recent success at The Open and the Bridgestone Invitational, followers of the game were skeptical. Is he playing better golf than anyone on the planet right now? A resounding yes. With that said, does that automatically translate into a 3rd straight victory? Definitely not. Even with the way that Rory has looked in recent weeks, it’s really hard to win three straight PGA Tour tournaments, and that’s not taking into account that two of them are Majors.

But Rory walked onto the first tee in Louisville oozing with confidence. He fired a first round-66, and found himself one shot back of the leaders after Friday. Picking up right where he left off, he stayed in the zone, shooting a 67 on Saturday, with the help of an eagle on 18. This propelled him to the top of the leaderboard heading into the weekend.

The third round was no different, where Rory looked calm and composed, shooting another 67 with only two bogies for the entire round. He still held the lead by one-stroke heading into the final round, but Rickie Fowler, Phil Mickelson and Jason Day were some of the few that had their sights on taking down the man on fire. The final round at the PGA Championship did not start out the way McIlroy envisioned, with bogeys at #3 and #6. He suddenly found himself 3-back of the leaders heading into the seventh hole, with Rickie, Phil and Henrik Stenson all shooting darts. But a birdie at 7, followed by an eagle at 10 put him back on top. With the lights literally going out at Valhalla (it was approaching 8:30pm local time), McIlroy calmly birdied 17 and knocked in his par putt at 18 to claim the PGA Championship title and maintain his top spot in the World Rankings.

A Familiar Number One

Of course McIlroy has held the top ranking before; he was top dog for the better part of a year.  However, after an equipment change, a lost relationship and consistency issues, McIlroy’s game slipped a little. Stars like Sergio Garcia and Adam Scott snuck ahead of him, playing some of the best golf of their careers. Despite these factors though, Rory has always lurked in the tall grass.

In fact, it’s no surprise this Nike Golf spokesperson has rebounded and leapfrogged everyone to reclaim the title of best in the world. He has now won four majors before his 26th birthday and shown an extraordinary ability to win on both the links-style British courses of his homeland and the well-watered parkland courses of America. In fact, Jack Nicklaus claimed that Rory McIlroy “has an opportunity to win 15 or 20 majors” once it’s all said and done. Now, that’s being held in pretty high esteem.

It’s really mind boggling when you think about it: he has now won two major championships and a World Golf Championship event in back-to-back-to-back starts. Plus, Rory has managed to win his dad some cash along the way, but that’s a story for another time.

The Pressures of Leading the Pack

The win at the PGA Championship demonstrated that McIlroy is able to sustain a top-of-the-rankings performance without letdowns we’ve seen so commonly in the past. Could he be ready to put the game on his shoulders? There are many things to consider, but it would not be far off base to say yes.

Not since Fred Couples in 1992 has a top ranked golfer, not named Tiger Woods, won a major championship with the number one ranking.  Not until this past weekend at Valhalla. We may be seeing the start of something truly special with this young talent from Northern Ireland.