They have played the PGA Championship 99 times. The tournament began as a competition for club professionals since there was no professional golf tour at the time. Even after a crude pro golfers’ tour was cobbled together for several decades after that the games’ best players made their primary living as club professionals.

The PGA Championship has long since stopped being dominated by the guys in the shop selling clubs and giving lessons. The casual golf fan could be excused for thinking the club pros had made a resurgence at this week’s get-together at Quail Hollow Country in Charlotte, North Carolina. After 63 holes of major championship play, there were five players tied on the back nine for the lead at seven under par. None had ever won a major championship; one was ranked in the world’s Top Ten.

None of the unfamiliar names were, in fact, one of the 20 club professionals that still play in the PGA Championship. Chris Stroud wasn’t far away. The 35-year old Texan was playing the Tour on conditional status just a week before coming to Quail Hollow when he won his first ever title after 290 tries. Hideki Matsuyama, seeking to become the first player from Japan to win a major, was that lone top-ranked player.

To that point, the PGA Championship had not been the stuff of dreams for CBS and the viewers at home hoping for a big-name shootout. Phil Mickelson played his worst PGA in a quarter century and missed the cut. So did Sergio Garcia, Ernie Els, Jim Furyk, Padraig Harrington, Justin Rose, Bubba Watson and a host of other major winners. Jordan Spieth, coming off an Open Championship and hyped all week as shooting for a career Grand Slam, played so poorly that he admitted in a press conference that his game might not even be suited to winning a PGA Championship.

Almost all the stars played dull golf at Quail Hollow. Dustin Johnson‘s finest moment came when he sprinted to the 18th tee on a rain-soaked Friday evening to hit a drive that would enable his group to finish before dark and avoid an early Saturday morning wake up call. Rory McIlroy announced after the tournament that a lingering injury might keep him off the course until April of 2018 when the next big tournament – the Masters – will take place. No doubt the PGA Tour and FedEx were not loving those words as they prepare for their season-ending spectacular.

What the PGA Championship was left with was a strange collection of hungry young players and unexpected veterans vying late in the proceedings for a first major title. In the end, it was 23-year old Justin Thomas who prevailed. The favorable signs came early on the par-five 10th hole when he hooked a drive off a wall of trees, and the ball bounded into the fairway. His lucky streak continued on the green when his birdie putt hung on the lip for 12 seconds before falling into the cup. (Note to rule sticklers concerned that Rule 16-2 allows only ten seconds, the clock does not start until the player reaches the ball after a reasonable time). 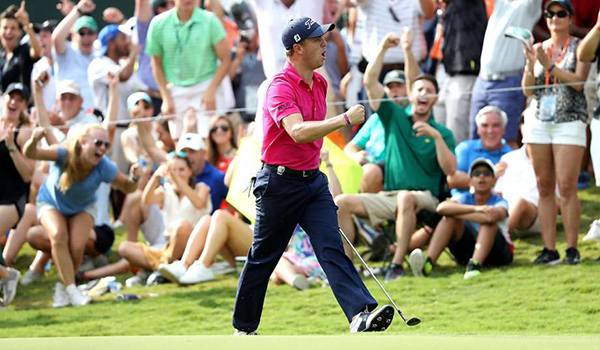 Justin Thomas After Birdie on 13 at PGA Championship, image: sfgate.com

Thomas for the PGA Championship Win!

Thomas made his own luck by chipping in for a deuce on #13 and striping a 7-iron over water to within 15 feet on the 220-yard 17th to set up another birdie. That was enough of a cushion to set up a two-stroke win despite a bogey on the 18th. When the year started, Thomas was known mostly as Jordan Spieth‘s good buddy since the two had competed against each other since they were junior phenoms at 14 years of age. Then came two early 2017 wins and a 62 at Royal Birkdale that was the lowest number ever shot in major championship golf. Now comes a triumph in the season’s final major, and Thomas has leaped to Number 6 in the world. He could well be Player of the Year. From here on out he will be chasing Spieth in the major championship count.