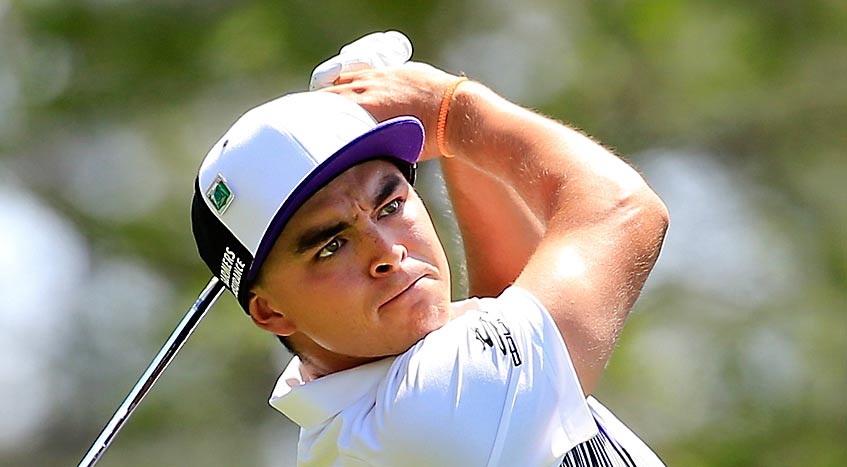 In 2010, at the Celtic Manor Resort in Wales, Rickie Fowler became only the third American golfer to represent the U.S. in the Ryder Cup before the age of 22. The first was the elegant-swinging Horton Smith who went on to win two Masters, including the first one ever played in 1934.The other: Tiger Woods. And he went on to win… well, everyone knows what he’s won.

It was quite obvious from Fowler’s 2010 Ryder Cup appearance that he had no fear on one of golf’s biggest stage. In his singles match on the closing Sunday, down three holes with three to play against Italy’s Edoardo Molinari, Fowler rallied to birdie 16, 17 and 18, which halved the match and earned a critical half-point for the American side. In comparison, Woods managed only one win and a draw in five matches during his inaugural Ryder Cup in 1997.

Big things were predicted for the personable Californian, who taught himself the game and played almost exclusively on driving ranges as a youngster. However, Fowler’s first steps following his flashy 2010 Ryder Cup debut were mostly stumbles.

Rickie would manage a fifth place finish in the 2011 Open Championship at St. Andrews, but would go on to miss the cut in that year’s U.S. Open. Then in 2012, at the Wells Fargo Championship, Fowler won his first – and to date, his only – PGA title, but otherwise did not play well enough to qualify for the Ryder competition that year.

As he celebrated his 25th birthday in 2013, Fowler could look around at the golf landscape and see younger players with more substantial resumes than his own. Rory McIlroy, who Fowler had edged out for PGA Rookie of the Year in 2010, had already won a U.S. Open and PGA Championship – each by eight strokes. And just months before Rory burst onto the scene, Jordan Spieth had become the first teenager to win a PGA event in more than eight decades.

This left the golfing public with one simple question: Had Rickie Fowler already gone from “unlimited potential” to an afterthought?

In search of an answer, it may be instructive to look at the career of Sergio Garcia – a golfer who played in the Ryder Cup at an even younger age than Fowler. At the 1999 biennial Ryder Cup competition, Garcia took to the Brookline Country Club as a mere 19-year old. Like Fowler’s, his performance was undeniably admirable. When all was said and done, he finished with three wins and a halve in a total of five matches.

Sergio is now in his mid-thirties and is still waiting for that elusive first major championship. His career is laced with a string of tortured near misses in his wake. Will this be Rickie Fowler’s fate as well? Or will the youngster surpass the competition?

Since his Rookie of the Year title in 2010, Fowler has certainly grown. Earlier this year, Rickie backed up a strong performance in the Accenture Match Play Championship with a fifth place finish at the Masters and a runner-up performance in the U.S. Open. In the Accenture, Fowler was eliminated in the semi-finals by eventual champion and fellow young gun, 26 year old Jason Day of Australia. And in the U.S. Open, he fell to the ever-solid Martin Kaymer. Both impressive performances nonetheless for young Fowler.

So is the 25 year old pro ready to leap into the ranks of major winners?

Well, that’s still up for debate, but there are signs of hope. Since Tiger Woods gave up his stranglehold on major championships in 2008, there have been 19 different major winners. To join the fraternity though, Fowler must deal with his formidable twenty-something contemporaries like McIlroy, Day, Spieth and Dustin Johnson – not to mention the likes of Kaymer, Lee Westwood and Justin Rose.

And the competition is fiercer still. For example, the ultra-talented Adam Scott has become a consistent threat in every big tournament he’s played. Some expect Phil Mickelson to play his “best golf ever” in the latter half of his forties. And let’s not forget about the lurking Tiger, who’s about to make his long-awaited return. It will not be easy, especially since his some of his most defining moments lately have been fashion statements in bright Puma golf gear.

Since he was “The Next Big Thing” five years ago – and though he’s still only notched that single PGA tour title – Rickie Fowler has had a good few months so far in 2014. Good enough to remind fans that he should be at least included in the conversation of golf’s elite.