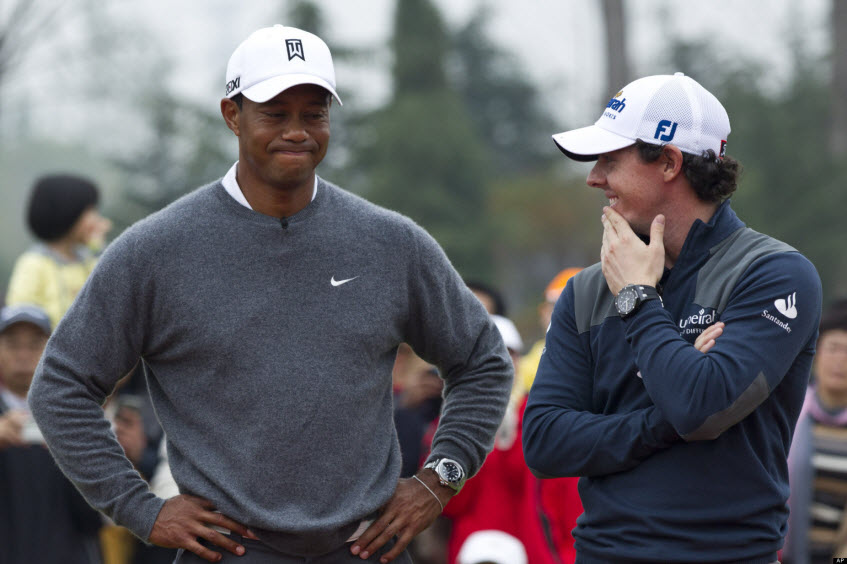 As Tiger Woods packed up his clubs to leave Royal Liverpool Golf Club on Sunday, you have to wonder what he was thinking about. The past or the future?

If it was the past, it was because Rory McIlroy performed like a young Tiger. For instance, the young Northern Irishman came into the final round of the Open Championship leading by six strokes, playing with a fierce Tiger-like confidence and ambition not seen on the Tour in years.

If the future, Woods may have been thinking about what challenges lay ahead. Haggled by injury (and social scandal), he hasn’t won a major since 2008. And the last time he hoisted the British Open trophy was in 2006. Regardless of what the golfer was thinking about, there’s no doubt that the present belongs to Rory McIlroy.

In the 2014 Open Championship, the driver may have won the tournament for McIlroy who became the first European to win three different majors. On Saturday, after Rickie Fowler pulled briefly into a tie with McIlroy for the lead, Rory would unleash a string of booming 350-yard drives to again extend his lead.

Similarly, on Sunday’s 16th and 18th holes, McIlroy was able to reach the par five holes comfortably, converting putts into eagles both times. This Nike Golf spokesperson’s focus all but crushed any hopes the competition had.

The enduring image of Woods we have from the 2014 Open is one of him poking around a bush searching desperately for his ball.

In the meantime, McIlroy was hitting drive-after-drive onto the fairway as if he were channeling a young Woods. After witnessing him struggle with the driver at The Open, is it even possible to imagine Tiger Woods winning another major?

One thing Tiger Woods likely cannot see when he looks into the future is his name as the favorite heading into every major. That role will now be played by Rory McIlroy.

McIlroy’s Open Championship win starkly reminds us that his talent is real. It qualifies his runaway wins at the U.S. Open and PGA Championship. Clearly, they were not strokes of luck. Unlike those two victories though, the top of the British Open field was more competitive. They pressured him to focus and stay locked in, which he did without flinching.

Tiger Woods will not be dismissed; that is hardly the case. The 2014 Open Championship was only barely inside his recovery schedule from major back surgery. Prior to the tournament, he had only played exactly two competitive rounds in five months. With that in mind, rough play at Royal Liverpool is nothing unexpected.

But that doesn’t make it any less bitter. Driving away from the golf course on Sunday, Tiger left behind a title he once held so securely: “best golfer in the world”.

It was slow and steady, but Tiger ultimately passed that title along to a player who crushes drives and wins majors like he used to do. Passing the torch is a new feeling for Tiger Woods. But after this weekend’s performance, it’s clear he is not the champion, the young stud that is Rory McIlroy.

Bookies are already taking wagers on who will win the 2015 Masters Tournament. What are the odds you ask? Rory McIlroy is the favorite at 9-1. Tiger Woods is the second choice at 11-1.

It would be a safe bet for Rory’s dad to place another stake on the talent of his budding young star.