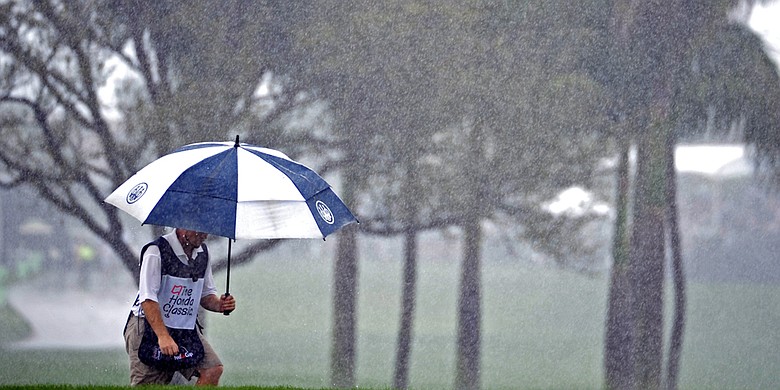 There’s a storm brewing between Tour caddies and the PGA, and it has nothing to do with the inclement weather during the third round of the 2015 Honda Classic.

According to a $50 million lawsuit filed in San Francisco’s U.S. District Court in early February of this year, an assembly of professional Tour caddies has come together to bring forth charges of violated rights and punitive damages against the PGA Tour, with the primary focus on the billboard-like bibs that tour officials have forced caddies to wear. The 39-page class-action suit has further exposed a longstanding rift between the PGA Tour and professional golf caddies.

Add to that the public humiliation that caddies claim they were exposed to after tour officials refused to let them seek shelter in the clubhouse during the Honda Classic in Florida, and you’ve got the makings of tumultuous weather on the horizon.

From exclusion to clubhouses during PGA Tour events, to a lack of health coverage and advertising compensation, Tour caddies making up the group claim longstanding mistreatment by the PGA Tour. So do disgruntled Tour caddies have a leg to stand on, or are current caddying conditions simply par for the course?

The class-action lawsuit specifies the latest grievance as a requirement that caddies wear sponsored bibs under the direction of the PGA Tour without receiving any compensation. The current bib space being sold to sponsors has become a valuable commodity for the PGA Tour, considering that tour officials – in strained negotiations with professional caddies – have already stated there is no room to budge on the current stance the PGA Tour has taken with the ad space on bibs.

The lawsuit also goes on to state that tour officials even reached out to players at one point to see if they would be willing to fire their caddies for refusing to don the bibs during tour events, an obvious sign that tour officials are not willing to compromise in any way with the people who care for the golf bags and clubs on the course.

The two class representatives for the suit, Mike Hicks and Kenny Harms, have already made clear that this isn’t an isolated objection: as many as 1,000 caddies could be included as plaintiffs in the lawsuit before everything is said and done, although several have already caved to the alleged pressure put on them by the players they’re working for.

Are Pro Caddies Being Treated Fairly?

The class-action lawsuit filed in February – along with the very public clubhouse exclusion during a thunderstorm at the Honda Classic – has shed light on the debate regarding the fair treatment of pro caddies, with many voicing their opinions about the relationship caddies have with the PGA Tour.

Part of the issue seems to be about the selective relationship the PGA Tour supposedly has with pro caddies. For example, many have pointed out that if caddies want to work PGA Tour events, then they’ve got to play ball when it comes to the bibs, much like retail store employees have to wear the required uniforms with brand names and logos galore.

However, professional caddies work for players as sub-contractors under the employment of each individual Tour pro. Caddies are not employees of the PGA Tour. If they were employed directly by the PGA, then they would be eligible for healthcare coverage and pension plans – another grievance listed in the class-action suit.

It’s hard to say how this case will turn out, but if the courts rule against the PGA Tour it could mean big bucks for caddies seeking past compensation for the very lucrative ad space they’ve been forced to wear on their bibs for years.