11 Things to Know about Oakmont’s History with the U.S. Open 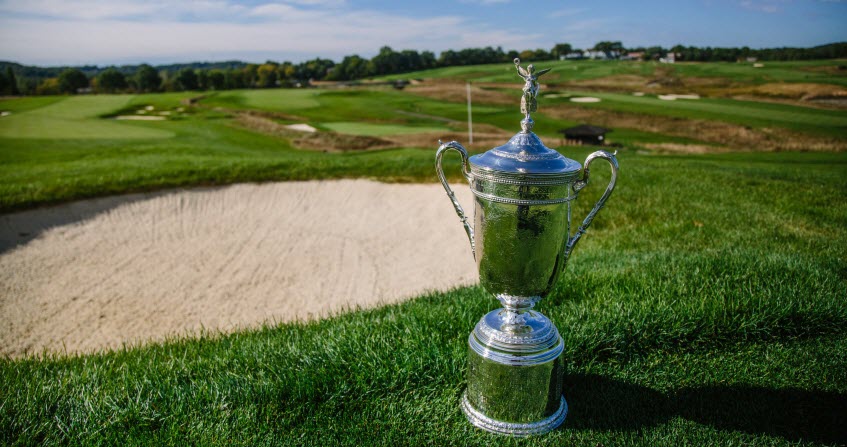 The 116th renewal of the U.S. Open returns to Oakmont Country Club in Western Pennsylvania for the ninth time, which has happened far more times than any other site. Here are 11 things to know about the history of the regal course of which Lee Trevino once said, “There’s only one course in the country where you could step out right now — right now — and play the U.S. Open, and that’s Oakmont.”

1. Oakmont was intended to be the hardest golf course in the country

Oakmont was wholly the creation of Pittsburgh industrialist Henry Clay Fownes. While welding a bicycle in 1898, a flare up scorched Fownes’ eyes and doctors informed him he had only a few years to live. Fownes divested himself of all his companies and when it turned out the medics were wrong he then threw himself into golf. He financed, designed and built Oakmont in 1903 and it originally played to a par of 80, including one par six hole. The course was a stout 6,400 yards – 20 percent longer than a typical turn-of-the-20th century course. 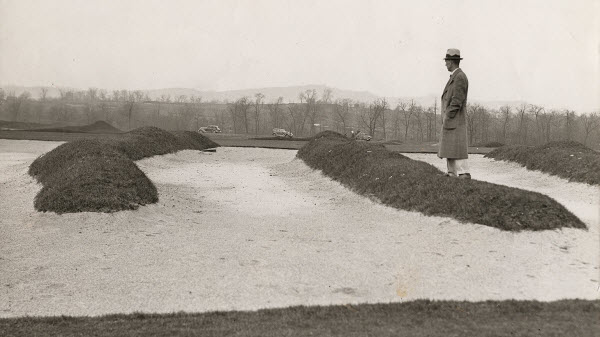 2. The USGA was slow to make its way to Plum, Pennsylvania

The first national tournament at Oakmont wasn’t until 1919. Par was shaved to 73 by that time and a 21-year old Oakmont member named S. Davidson “Dave” Herron beat 17-year old Bobby Jones 5 & 4 in the finals – one of the few times the golfing immortal would hear his misses openly cheered in the gallery. The efforts of the greenskeepers were also recognized as the USGA wrote the club a letter stating, “Never in the history of golf in this country has the championship been played on a course in such fine shape.”

3. The first U.S. Open at Oakmont was a grind for players

The first U.S. Open at Oakmont was played in 1927, a quarter-century after it opened. The winning score of 301, 13 over par, was the highest in modern Open history – and it wasn’t even enough to easily determine a winner. Tommy Armour and Harry Cooper had to go around the beast one more time, with Armour winning 76-79. Armour described the course as inducing “muscle-tightening terror.” Save for the World War II years of the 1940s, the USGA has brought the Open back to Oakmont every decade since. 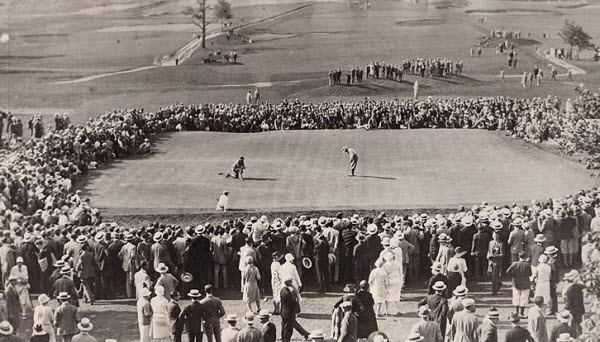 The next time the U.S. Open was played at Oakmont it was 1935, and the only player to break 300 was a local club pro named Sam Parks, Jr., relying on “local knowledge” of the course. The unknown Parks would return to South Hills Country Club and the biggest tournament he would ever win again was the Pennsylvania Open.

Attending the 1935 event was Edward Stimpson, a captain of the Harvard golf team and Massachusetts state amateur champion. After watching in amazement as a Gene Sarazen putt rolled off a green and into a bunker, Stimpson returned home and invented a device to measure the speed of greens. It consisted of a block of wood three feet long and a concave ramp notched to hold a golf ball. When the ball was released on a flat surface the length of the roll provided a numerical reading that equated to “speed.” Stimpson sent 25 prototypes to the USGA which ignored the device for four decades. It wasn’t until the 1970s that the powers that be began concerning themselves with uniform green speed. Stimpson’s design was resurrected, given a few tweaks and reborn as “The Stimpmeter.” 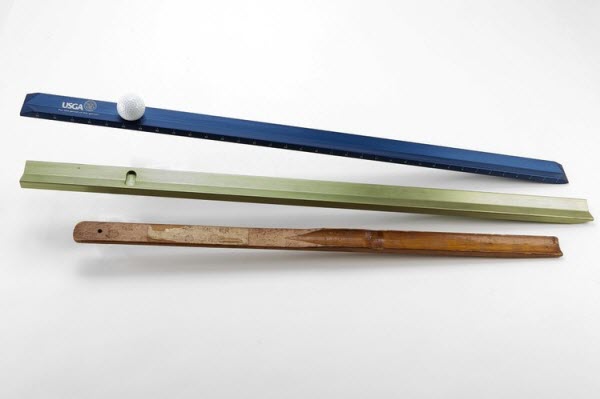 3 Generations of “The Stimpmeter”, Including the Original Version, image: wsj.net

6. Oakmont greens are fast in their natural state – they have to be slowed down for the U.S. Open

To decide on a preferred green speed for its championships the USGA spent two years traveling to courses and testing green speeds. The average was 6.5 and only two were measured at 8.0. When they showed up at Oakmont the reading was 11.5. If the course runs dry the Oakmont greens can read 14 or 15. For the United States Open, the club has to slow down its greens to accommodate the best players in the world. And that is only for the twelve flatter greens – six of Oakmont’s putting surfaces are not flat enough to register a Stimpmeter reading. The ball, like Sarazen’s 1935 putt, just keeps rolling and rolling.

7. If the Oakmont greens don’t get you at the U.S. Open, the bunkers will

Henry Fownes designed the original course with about 100 bunkers, but that number would grow over the years to surpass 300. As technology improved, William Fownes would make sure obsolete bunkers were replaced with adequate hazards. Bunkers were brought up to the edges of fairways and greens to challenge better golfers. All were filled with thick, coarse Allegheny River sand that required phenomenal strength and skill with the wedge to extricate a wayward shot. The most famous set of sand bunkers at Oakmont are between the 3rd and 4th fairways, laid out in advancing rows like church pews. Over the years many a congregant took the Lord’s name in vain as he advanced feebly from one sand pit to the next. For a while Fownes even employed special rakes that created furrows in the sand intended to remove any element of fate in an Oakmont bunker. Every golfer received the identical lie – bad. 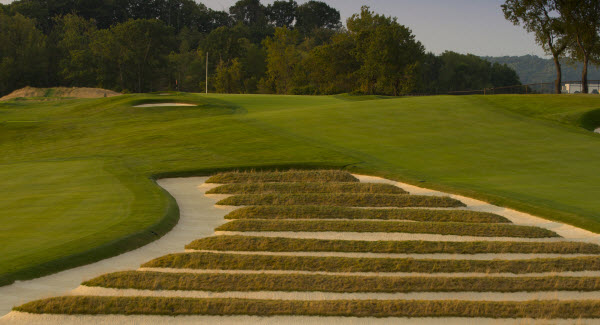 8. Oakmont survived an insurrection that gave it a new face at the U.S. Open

While other rich men were constructing playgrounds for their society friends, Fownes had something altogether different in mind for Oakmont. There were no frills, no gala social events – just golf. Fownes died in 1935 and his son continued the family’s autocratic rule of the club. America was changing and an old-styled British-flavored golf club held little appeal to many members. Charles Fownes resisted the membership votes to add the requisite swimming pool and family amenities of a modern country club until he could fight no longer when he resigned in 1946, four years before his death. One of the changes the new regimes made was to plant trees. By the 1990s, at the urging of the USGA, the greens committee decided to restore the course to its beginnings as a British-style links with the winds whipping across the barren landscape. Every one of more than 5,000 mature trees was yanked from its roots. Today, one can once again sit on the clubhouse porch, and as Grantland Rice wrote in 1939, “enjoy the view of seventeen of Oakmont’s eighteen flags.”

The year was 1962 and Jack Nicklaus and Arnold Palmer tied at 283, one blow to happy side of par. Arnie was in his prime and was the local favorite, having grown up in nearby Latrobe. Nicklaus had never won a major tournament at that point, but slayed Palmer by three strokes with an even-par 70. He pocketed $17,500 for the win and as Palmer astutely warned after the playoff, “Now that the big guy is out of the cage, everybody better run for cover.”

10. The lowest round in U.S. Open was shot at Oakmont

In 1973 Johnny Miller obliterated the scoring record at the U.S. Open by coming from six shots off the pace in the final round to win with a 63. Only three other players shot in the 60s that day. Miller hit ten approach shots inside of 15 feet, and consider the clubs he hit to set up birdies – 3-iron, 9-iron, 5-iron, 2-iron, wedge, 4-iron, 4-iron, 4-iron.

11. You have to cross under America’s first superhighway while playing the U.S. Open at Oakmont

Before the coming of America’s first four-lane all concrete highway on October 1, 1940, a motorist was forced to negotiate 939 cross streets and 12 railroad crossings to drive from one end of the Keystone State to the other on the famed Lincoln Highway. The revolutionary Pennsylvania Turnpike featured just a handful of exits and on-ramps, but the new road came at a cost to Oakmont as its route sliced directly through the golf course. The eighth green had to be moved about ten yards and a pedestrian passage was required to link the course – now a National Historic Landmark – together. 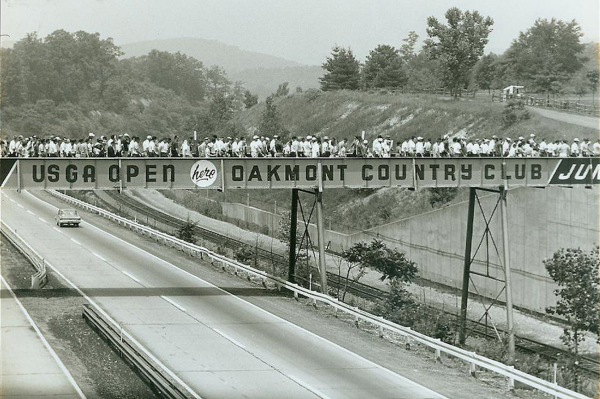 The Bridge Over the Pennsylvania Turnpike during the 1962 U.S. Open at Oakmont CC, image: sbnation.com