The History of Golf Bags

George May did more than anyone else to transform the history of the golf bag. History remembers May as one of golf’s greatest promoters and visionaries. He was the first to offer large purses for professional golf tournaments, and in the 1940s and 1950s, his Tam O’Shanter World Championship was more important to the pros than the United States Open. After all, winners pocketed $25,000 from May’s tournament and took home only $9,500 for being crowned U.S. Open champion. May was the first to televise his golf tournament, starting in 1953. In those days, he had to pay the networks to put on the broadcast, not collect rights fees. In 1960, at the age of 70, May sent tremors throughout the traditional golf world when he replaced the caddie corps at his Tam O’Shanter Golf course with electric golf cars. Hidebound Executive Director of the United States Golf Association, Joseph Dey famously scoffed: “This can’t be done at all clubs. Some courses are too hilly and players at public courses can’t afford golf carts”. However, May was right. In short order, electric carts, which were hardly seen enough to even be a novelty, became commonplace. Golf bags went from being little more than canvas sacks to carry clubs to being large carry-alls that required maximum effort just to shoulder from car trunk to the golf car line.

The Evolution of the Golf Bag

Long before the cart bag, golfers simply carried their clubs bound with twine. The first club-carrying golf bags appeared in the late 1800s and early 1900s. They were utilitarian affairs with a small opening – usually four inches in diameter, about the size of a golf hole – and stitched together with canvas. They were called “pencil bags” for their slender, cylindrical appearance. From their introduction until George May, the golf bag evolved little. Over time, it became slightly larger with a pocket sewn into the outside. Fancier models were crafted from leather or cloth.

With electric golf carts doing most of the work, the bags grew ever larger and heavier. Hefty vinyl was often the bag material of choice. The cart bag reached its absurd conclusion in 1979’s Caddyshack where Rodney Dangerfield’s golf bag featured a phone, a television, and its own sound system. Real golfers, however, had to lug these things for 18 holes if they weren’t riding. A San Jose, California golf pro named Rick Reimers helped solve the problem by borrowing from backpack manufacturers and inventing golf bags constructed from lightweight nylon. From this point, golf bag construction has differentiated to serve the various preferences of golfers. 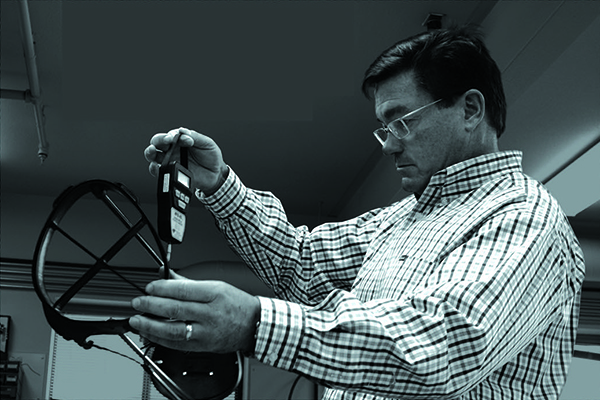 For walkers, the lightweight carry bag became more sophisticated. In 1986, Reimers’ company, Sun Mountain, introduced the stand bag with built-in legs that formed a tripod so players could easily access the clubs inside. Bags featured drop-tops that gave golfers the ability to segment the short irons and pull multiple clubs at one time. That small opening from which to pull clubs began featuring club dividers and then plastic tubes for individual clubs. Sun Mountain created Dual X-Strap Technology so its carry bags could be carried more comfortably with support from both shoulders.

The Golf Bag in the 21st Century

These days Sun Mountain golf bags offer options with straps just for left-handed golfers. It’s stand bags now feature as many as nine pockets and still borrow from the backpacking world with an included hydration pouch. In a golfing landscape where walking golfers are becoming as rare as holes-in-one, Sun Mountain’s stand bags are designed to be cart-friendly with a cart strap pass-through, leg-lock system, and cart-friendly bottom. For those die-hard walkers the diminutive “pencil bag” is still around; it has been rebranded the “Sunday bag,” aimed at golfers who prefer to tote just a few clubs at a time for an informal round.

Cart bags have become an umbrella category unto themselves. Top of the line Cobra Golf staff bags are designed to carry every conceivable item that a golfer could possible need during a round. For example, the Cobra King Staff Bag boasts seven pockets, including apparel pockets for rain gear, windy conditions, and extra socks. Rodney Dangerfield would appreciate that there are even fleece-lined pockets to protect cell phones. With the advent of affordable golf customization, it is routine to get golf bags personalized for easy identification on the carts and a professional Tour-ready look.