How Does Golf Ball Construction Affect Your Game?

For nine months, sports fans had to hear about how footballs can be tampered with to suit a quarterback’s preferences. Imagine what would happen if there was one standard golf ball for the entire sport, and all the shenanigans that would ensue thanks to the many ways golf balls can be tweaked in their construction. Other than some basic regulations set up by the USGA and PGA to keep a ball Tour-legal, there are a variety of features that designs can modify to affect play. Let’s look at a few…

This is the one area where all golf balls should be the same – 1.68 inches in diameter. Before the 1980s, golf balls were also constructed that were 1.62 inches, known in the United States as the “British ball.” The smaller ball flew further on average, but it has since disappeared in favor of the slightly larger, now standard, model. The British Ball was perfect for Arnold Palmer at the 1961 Open Championship due to the crazy high winds of 50 mph and the torrential rain. The ball, combined with’s Arnie’s infamous 1-iron, helped lead him to victory that year at Royal Birkdale. 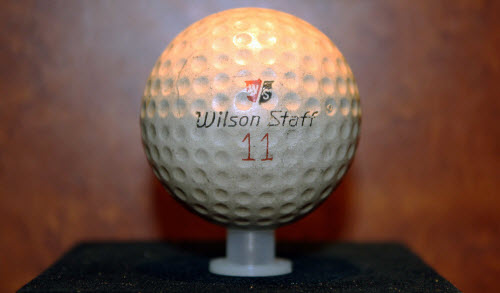 For most of its existence throughout history, a golf ball was nothing more than a leather pouch stuffed with boiled goose feathers. Needless to say, roundness was a challenge, which resulted in erratic ball flight. The “featherie” was also not a champion in the rain when a mighty wallop was required to move it any distance.

Today most balls are either made of a single high-energy core composed of solid rubber (a two-piece ball, counting the cover) or of a solid core surrounded by various mantles layers (a multi-piece ball), which can affect elements like ball spin. The majority of today’s amateur players prefer two-piece golf balls, as they seldom go out of round, and carry and roll longer distances. Better players and professionals tend to opt for a three or four-piece ball, which provides greater spin and enhanced control. But how those manufactures compose the inner part of the bar is up to their respective R&D departments and varies greatly. 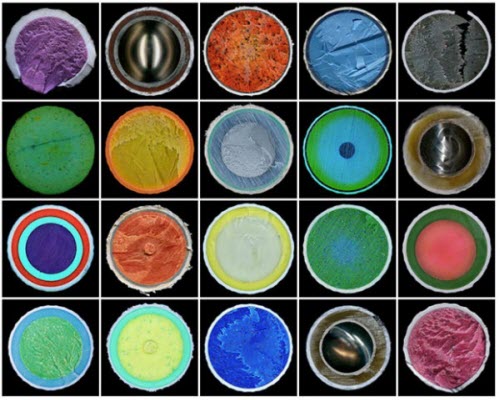 Compression is what happens to the ball at the moment of impact, in a sense momentarily “squishing” the ball. When it snaps back into round, it launches off the clubface. Generally, they are constructed to be either high-compression or low-compression golf balls. Better golfers with high swing speeds favor high-compression balls that will result in longer flying shots. Average, women, and senior golfers often find more satisfactory results with lower compression, or “softer” balls that respond better to slower swing speeds and better control.

In the middle of the 1800s a Scotsman used some gutta percha, a natural rubber obtained from the dry sap of the Malaysian sapodilla tree to fashion a golf ball (commonly called “guttys”). 1900s brought the balata ball, which is a soft natural rubber similar to the gutta percha. The balata ball was considered the finest material with which to wrap a golf ball. Balata balls spin easily and offer the ultimate in feel and control, but they’re incredibly soft and easily dent or cut.

But all that is in the past. Come the 1960s, the DuPont Company engineered a thermoplastic resin that was given the brand name “Surlyn” and applied to golf ball covers. Surlyn, and its softer synthetic counterpart, Urethane, now dominate the covers of golf balls. Both are virtually indestructible, no matter how poorly abused by a golf club. Surlyn covers are mostly preferred by high-handicappers as they provide exceptional distance while remaining inexpensive. Urethane cover balls, while slightly more expensive, are softer and yield better backspin and feel for more stopping power, something many low-handicappers and tour-players prefer. 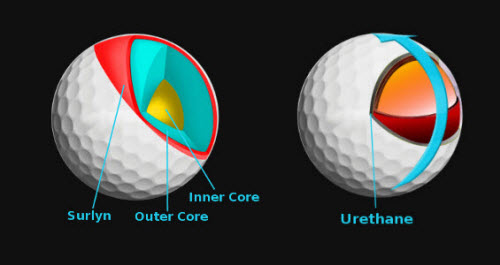 Featheries and gutty balls were both made smooth, but as players soon discovered, once the balls were nicked up by use they began to fly higher and straighter. That evolved into the “dimples” of today that impart backspin, reduce drag, and get golf balls airborne. Manufacturers have investigated every manner of dimples including how many to put on a golf ball, how deep to make them, what is the preferred shape, how big they should be, and what pattern should be used. Each company has come to its own conclusions.

Dimples help determine what kind of performance you’re going to get from your ball. Distance golf balls typically have a dimple pattern which helps keep them low and bounce far, while a control ball’s dimple pattern increases lift for steep decent and more stopping power.

So while you can see that different companies impart different technologies into their golf balls, the trick is to find which ball is the right ball for YOUR game. And while you’re at it, you might as well go with personalized golf balls. Shameless plug, we know.