Jordan Spieth on a Roll with Two Dominating Wins 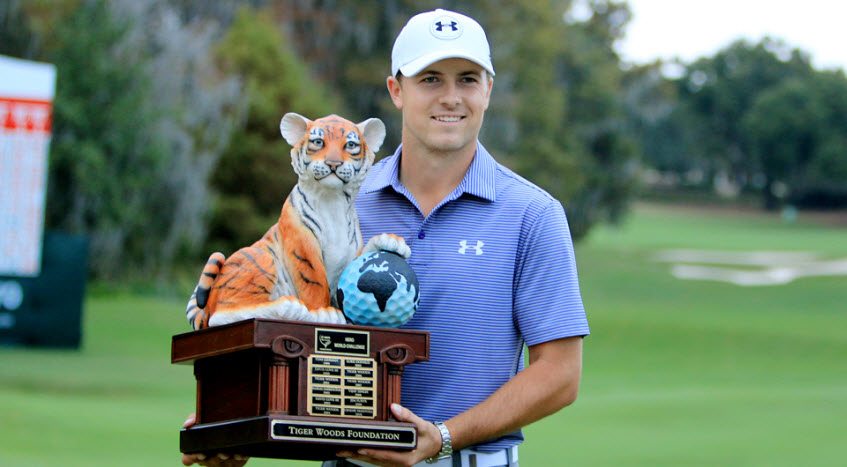 If you think that a Texas landslide could never take place in Australia, then you obviously didn’t catch the 2014 Emirates Australian Open. And the landslide continued in Florida with Spieth dominating the field at the Hero World Championship with a 26-under, 10 stroke victory.

The story of this past weekend’s Hero World Championship at Isleworth was the return of Tiger Woods, who hadn’t competed since the 2014 PGA Championship at Valhalla last August. While the cameras were initially on Tiger and his new swing, Spieth was quietly shooting an opening round 66 and a second round-67.

Round that out with a 9-under third round and another 6-under fourth round at you get an astonishing 26-under scorecard, a full 10 strokes better than 2nd place finisher Henrik Stenson.

Jordan Spieth, the 21-year-old Dallas native that stole the spotlight during the previous weekend’s tournament Down Under, took home the win after shooting a jaw-dropping 63 to wrap up the week. The Aussie Open marked Spieth’s first tournament win for the calendar year, in which the young golfer put up numbers that have garnered the attention of golf fans and professionals alike.  Spieth not only finished the tournament 13 under, but also set a new course record at the Australian Club in Sydney, wrapping up his final round performance with a whopping 8-under par.

Let’s take a quick look at the promising young golfer’s impressive final round during the 2014 Emirates Australian Open.

While Jordan Spieth was putting up scores all weekend that would be the envy of any professional golfer, it was his Sunday performance that solidified his nameplate on the Australian tournament’s coveted Stonehaven Cup.

Spieth entered Sunday’s final round at 2-under 69, setting himself up for a run at the Open win among two other golfers that started the day with a share of the lead.  Spieth quickly went to work, proving his proficiency with his irons by landing a second shot at the 3rd hole right next to the flag, setting himself up for his first birdie of the day. Spieth only gained momentum from there, posting three more birdies on the front nine alone, all while refusing to let Sunday’s challenging winds hinder his game.

Jordan’s putter showed no signs of cooling down during the back nine, either, sinking an impressive putt on the par-3 15th hole to check off yet another birdie for the day.  The young Texan was so far ahead of the pack at this point that the final three holes of the tournament were essentially played to find out who would be placing second in the Aussie Open.

Still, he decided to cap the best round of his life off right by sinking one last birdie putt on the 18th hole, finishing 13-under for the week while turning in a legendary last-round scorecard.

The young American’s Australian Open win not only marked the first time that a player from the US has taken the cup since 1993, but also moved Mr. Spieth from 14th to 11th per the Official World Golf Ranking. Now, after his dominating performance at the Hero World Challenge, he’s sitting in the Top 10, currently in 9th place.

A Round To Remember

Some of the world’s best golfers would probably rather forget about their performances during the Emirates Australian Open this year.  Rory McIlroy, ranked No. 1 golfer in the world, had an all-out meltdown on Saturday’s third round, racking up a series of bogies that led to his final tally of 2-over par for the tournament.  The 25-year-old Irishman probably couldn’t get back to the airport fast enough.

Jordan Spieth, however, will most likely cherish his performance for the rest of his life.  In post-round comments made to the Associate Press, Spieth declared that, “It’s [Sunday’s round] the best round I have ever played, especially considering the conditions.  The golf course was in great shape, and it’s an experience I will never forget.”  If he had a crystal ball and could see into his Hero World Challenge future, he may have said “just wait until next week…”

With the previous win Down Under, Jordan Spieth joins the ranks of golfing legends like Gary Player, Jack Nicklaus, Kel Nagle and Tom Watson, all of whom have won the Australian Open.

With his follow-up win at Isleworth, he may be on his way in creating his own legacy. “This caps off the best golfing year that I’ve ever had,” Spieth said. “Each year has been a little better than the last. Hope it continues in 2015.” The golf world is watching, Mr. Spieth.