The goal of the Chrome Soft wasn’t simple: offer the majority of golfers a soft feel, high distance and Tour-level spin. To achieve this, Callaway used a three-piece construction with their soft DuraSpin cover and low compression Soft Fast core. This produced a feature known as Spin Separation, which many ball manufacturers have been chasing since. This translated to lower driver spin being generated off the tee, with increased spin from shorter irons while attacking the green.

Phil Mickelson was one of the first Tour pros to put it into play, and others including Kenny Perry and Sam Saunders soon followed. This fact alone was newsworthy, with Mickelson moving from the 105 compression SR3 to the Chrome Soft rated at a low 65. This served as a clear endorsement of what the Chrome Soft was trying to achieve; the distance and control of a Tour-level performance ball with a soft feel that many players prefer.

One of the first differences seen in the new Chrome Soft and Chrome Soft X is the use of 4-piece construction. With more layers comes an enhanced capacity to produce spin separation, offering different spin profiles throughout the club range. Callaway seems to be pulling out all the stops for this iteration of the Chrome Soft, hopefully to the benefit of both Tour pros and average golfers. 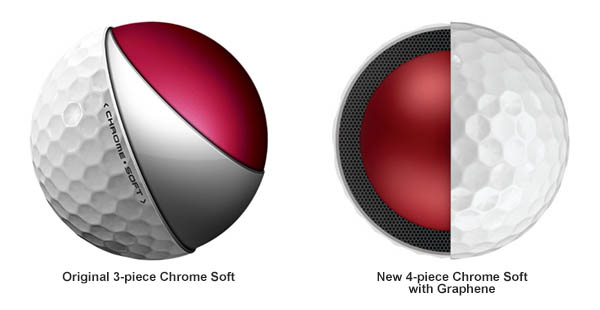 If you have never heard of Graphene before, you are not alone. Originally discovered in 2004, Graphene is an atom-thin sheet of graphite with almost limitless potential as a material. Due to it being one of the strongest materials in the universe with similar levels of high flexibility, the scientists who found it ended up winning the Nobel Prize in 2010.

With all these amazing characteristics, it’s no wonder that Graphene made its way to golf. However, while Graphene has appeared in shafts, the 2018 Callaway Chrome Soft marks its first use in a golf ball.

In the Chrome Soft, the Graphene layer has been used as a “crash helmet” to expand and soften the inner core. Callaway states that it allowed them to increase the difference in compression between the two cores. This allows them to maintain the feel that has made the Chrome Soft famous while increasing ball speed and distance from the whole bag.

Graphene has more implications than just offering improved distance. Callaway has made the Chrome Soft cover even thinner and softer, adding a bonus to both greenside spin and durability. The HEX dimples on the Chrome Soft have also been upgraded. Callaway states that they have used a new molding process to create a seamless cover that offers more consistency regarding drag reduction and aerodynamics.

Both versions are available in white and yellow. In addition, they are offered in yellow and red Truvis patterns, aimed at providing better visibility on the course and in the air.

Pick up some today from Golfballs.com and try this groundbreaking new golf ball technology out for yourself. The new Callaway Chrome Soft is available in the following models: