Guide to a Proper Golf Stance 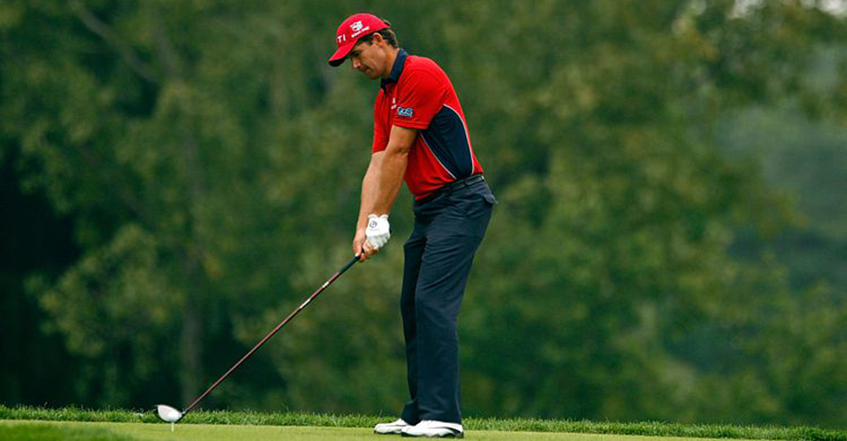 One of the marvelous things about golf is that anyone can play the game. No matter what body type you are, there is a way to excel at golf. You can be long and lanky, like Dustin Johnson, or big and bulky like Andrew “The Beef” Johnston. You can have the physique of a linebacker like Brooks Koepka or be a 160-yard placekicker-type like Justin Thomas. The key is that you must adopt a stance that aligns with your body build. And if you find your correct stance, you will be making quality shots on the course in no time.

The first step to developing your stance is finding a position that is natural to your body type. In short, finding the position that allows for your arms to hang naturally straight down from your shoulders. However, that’s sometimes easier said than done. There are a lot of different stances, so find what works for you.

The foundation provided by your stance is most important in driving the golf ball. The width of your stance should be even with your shoulders. The ball should be positioned opposite the inside of your lead foot to strike the ball with a slight upswing. If you have difficulty rotating your hips fully, flare out your feet at a slight angle to promote a full and free swing. If you have plenty of flexibility, square up those feet.

Power comes from the ground, and you can maximize distance by feeling your feet planted in the turf. When Tour pros belt their tee shots, it’s common to see them reach for “an extra gear.” One way to find extra power is to move back from the ball an inch or two so you feel like you are reaching just a little in your address. Flex your knees and prepare to make an athletic move through the ball.

If you have difficulty with slicing your drives, you can move your back foot several inches away from the target line, creating a closed stance. This was a favorite move of Ben Hogan, who is considered the finest ball striker of all time. The closed stance encourages a flatter, inside path to the golf swing that helps generate a hook. Similarly, if you find yourself hooking the ball you can angle your front foot into an open stance.

If you are employing a closed or open stance, you want to make it less exaggerated with the irons. Ball position is a personal preference – some players hit all their shots off the inside of the front foot and others move the ball progressively back in the stance as their irons get shorter. In general, if you want a higher ball flight, play the ball forward in your stance. If you want a lower trajectory, move the ball back in your stance. Unless you are playing a low punch, however, do not move the ball back further than the middle of your stance with an iron shot.

Lee Trevino once said, “It is impossible to stand too close to the ball.” Trevino played a consistent fade so that certainly worked for him. And when it comes to iron setup and stance, there are few aspects to consider. If you want to fade your iron shots, stand as close to the ball as possible. If you prefer a draw, move further away. 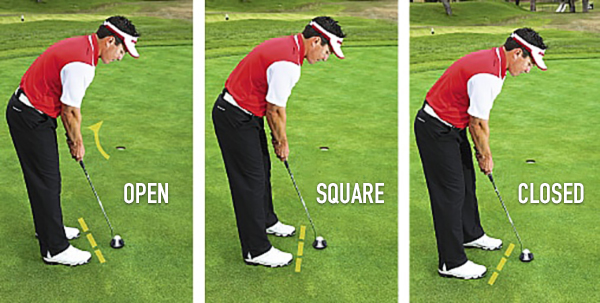 Iron shots should be struck from a narrower stance since accuracy, not distance, is your goal in this scenario. In fact, pitch shots and chip shots can be executed with your feet almost together. When you are on the range you can start by hitting all your iron shots with your feet together as you find the full stance that works best for you.

While your stance should be the same width as your shoulders to create the proper foundation for a driver swing, don’t be afraid to try widening your stance when you need an extra ten yards off the tee. Make sure you try this trick with a full shoulder turn to accommodate this power hit.

However, a golf stance too wide (about two inches outside of neutral joint alignment with the hips) can prohibit a proper weight transfer during the hit – resulting in an improper rotation and an underwhelming shot.

Finding the Right Stance for You

The key to making great shots is finding the stance that best fits you. Whether you’re tall like 6’4” Johnson or broad-shouldered like Andrew “The Beef” Johnston, your set-up will differ. This doesn’t mean that one pro’s stance is any more correct than another pro’s stance. It’s all about understanding what works for your body type. Once you understand that, you’ll find the right stance for your game.