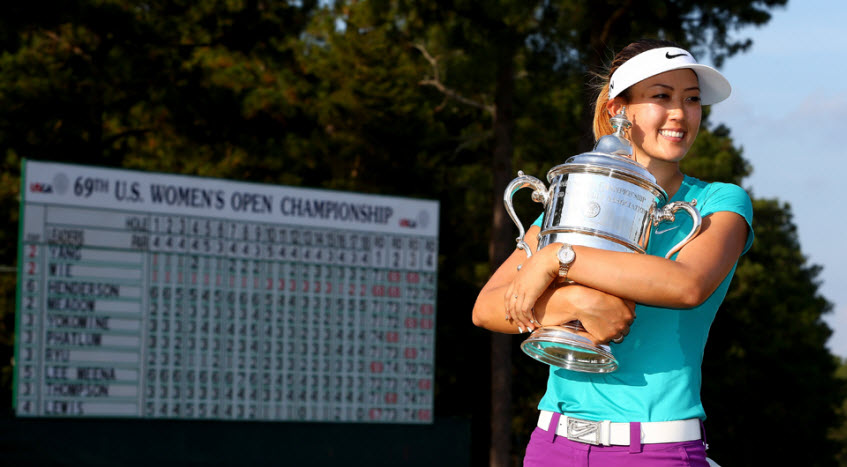 Is it possible to go to, and then return from, your dreaded golfing grave at the tender age of 24? Does the name Michelle Wie ring a bell?

At the age of 14, she took a sponsor’s exemption to play on the men’s PGA Tour in her home state of Hawaii. She eventually missed the cut, but shot 68 in the second round. There was clearly a trend of excellence developing for the young golfer.

That was ten long years ago. Michelle Wie turned professional just before her 16th birthday. She was consistently compared to Tiger Woods and it seemed like she was perfectly positioned to similarly take over the world and media. However, years came and went, and we heard very little from this once celebrated prodigy.

In her early days as a pro, Wie spent as much time competing against men as she did women, and as much time playing in Asia and Europe as in America. But no matter where the tournament was held – or who her competition was – wins escaped her.

It was a struggle for Wie. At one point, she even had a stretch of 14 consecutive rounds without breaking par. She’d become known for withdrawals in the middle of rounds and soon enough suffered a disqualification at Bighorn Golf Club. To make matters worse, Wie then incurred wrist injuries and had to spend time away from the course. Turning things around became harder still.

During the course of her career, Wie took a detour at Stanford University. She attended class in the fall and winter quarters and tried her luck in professional golf the rest of the year. When Wie arrived in Palo Alto in 2007, she was making upwards of $19 million a year solely in off-course endorsements with companies like Nike Golf and McDonalds. However, it didn’t stick. And later, when Michelle Wie obtained her diploma in 2012, she faced the same (un)employment questions surrounding many other college graduates.

Wie refused to give up on her game. In her 81st professional tournament, the former golf wunderkind finally won her first LPGA title in late 2009 against a limited field in Mexico. The following year she also notched a victory against a full field in the 2010 Canadian Women’s Open.

But these wins didn’t seem to be enough. By 2014, a full decade since her introduction as the most promising young female golfer ever, Michelle Wie had still remarkably won only twice, and never on American soil.

The field heated up and young Americans like Stacy Lewis and Lexi Thompson pushed Wie further and further from the spotlight – not that the spotlight was even seeking Michelle Wie in major competition anymore.

In 2014, Michelle Wie sightings started popping up on major leaderboards again. At this year’s first major, the Kraft Nabisco Championship, she managed to place second. In the subsequent LPGA Lotte Championship, Wie finally won her first LPGA event in the United States by birdieing six holes on Sunday, in front of her home fans in Hawaii nonetheless.

After such a strong start to the year, there was an assumption that people would be excited about her. But when the women gathered at Pinehurst #2, just a week after the men played the same course, there was no noticeable buzz around Michelle Wie. Maybe it had something to do with her otherwise inconsistent record in the previous six Opens: CUT; Did Not Qualify; Cut; T55; T35; Withdrew.

All the headlines out of North Carolina seemed to feature 11-year old Lucy Li, the youngest player ever to qualify for the Open. Draw your parallels as you wish. But this one is most important: while the press breathlessly chronicled each and every one of Li’s 156 shots (to eventually miss the cut), the 136 shots of the one-time phenom whose records she was trying to break went mostly unnoticed.

Wie looked like her young self again and she remained at the top of the leaderboard through the weekend. By tournament’s end, Wie solidified her first major championship win. Her time had finally come. Even a double-bogey hiccup on the 16th hole on Sunday did nothing more than elicit an easy smile.

And so there she is – a 24 year old one-time child prodigy, standing on the shoulders of determination and holding the most important trophy in women’s golf.