Rose Wins at Congressional in Playoff 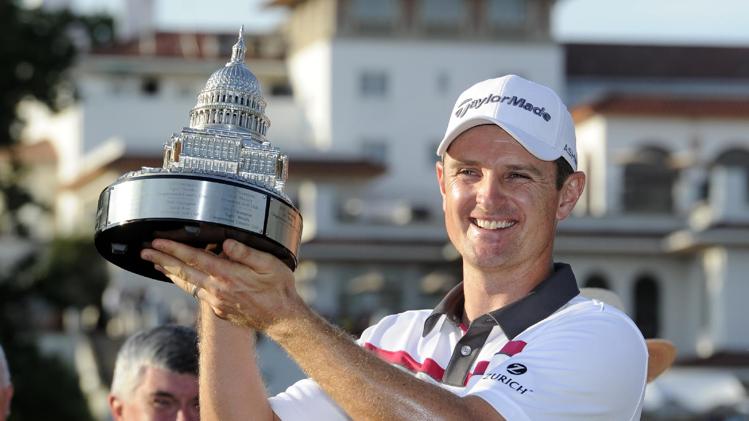 Fans are always looking for a good saga to follow at a professional golf tournament. When Tiger Woods is in the field, he’s always a story. Phil Mickelson? Always a story. When Tigers Woods misses a 36-hole cut, as he did this past weekend, fans are left scrambling to find compelling story lines on the weekend.

There are two choices: chase the story around the golf course or sit back and hope it appears on its own. For a while it appeared as if that story might be 23-year old Patrick Reed, who already has two PGA Tour wins in 2014 and took a two-shot lead into Sunday. Although no one except for the hardcore golf fans had ever heard of him, Reed proclaimed himself one of the top five players in the world. As the Quicken Loans National commentator Nick Faldo wryly observed about the third round leader, “He has self-belief, the best 15th club in the bag.”

At Congressional, fans were best served on Sunday sitting back and letting the golf stories come to them. Reed did not have a “Top-Five-player-in-the-world” round and found three double bogies to shoot 77 and fall out of the Top Ten. His playing partner in the final pairing, Seung-yul Noh, collapsed to a 79 and staggered to the house tied for 28th. Eight different players would pop to the top of the leaderboard at some point on Sunday.

In the end, 72 holes were not enough to determine the Quicken Loans champion and fans in the gallery were going to play witness to a great finale. Justin Rose and Shawn Stefani each finished at 4-under par 280. Rose is 33 years old and Stefani 32, but that is where all similarity ends.

Rose was born in South Africa before moving to England at the age of five to grow up in the southern coastal county of Hampshire. The golf world has known his name since 1998, when he eagled the final hole at Royal Birkdale to finish tied for fourth. After being ranked as high as #3 in the world, Rose won his first major championship in the U.S. Open at Merion in 2013.

Shawn Stefani was born in Baytown, Texas and went to college a few miles away at Lamar University in Beaumont. It seemed no one in the golf world outside of East Texas had heard Stefani’s name. He played in professional golf’s mini tours for seven years and the only time he qualified for a major tournament was in the Open that Rose won. He did have a moment of glory there, however, when his shot on the 229-yard 17th hole at Merion found its way into the hole for an Ace. This was the first ever ace in the 18 United States Golf Association championships contested at Merion.

The two golfers even reached their playoff in wildly disparate fashions. Needing a par on the final hole, Rose drove well left into the woods. This seemed to signal looming doom, but with complete confidence in his TaylorMade clubs, he managed to execute a series of shots to find his way into a 14-footer for an all-world bogey. Stefani could then win his first tour title outright with a birdie and he played an efficient hole, but missed his life changing 20-footer.

Unfortunately, golf fans had little time to appreciate the stark contrast between the #12 player in the world and the #243. Stefani drove even further left than Rose on the 18th and then punched his 6-iron into the same lake. For Rose it was down the middle, on the green and two putts to claim his sixth PGA title.

He is now headed for the Open Championship at Hoylake where he will be among the favorites to win the Claret Jug. Stefani, with by far his best ever PGA finish, is on his way for the John Deere Classic, presumably with a lot more confidence as a touring professional.