How Golf Shoes Can Improve Your Game

Sam Snead, universally considered to have had the most natural golf swing ever, grew up playing without golf shoes, or any shoes for that matter. “I learned to play golf barefoot,” he once wrote. “It feels good out there, wiggling your toes. When you step up to the ball, you’re connected with the earth and you almost feel the roots go down. Besides, you don’t swing so hard. You swing nice and easy, just like the book says.” Snead never put his shoes on until frost interceded on the golf season. When his swing felt out of sorts at the 1942 Masters, he played nine holes barefoot in a practice round to re-locate his smooth rhythmic swing motion.

Not everyone is Sam Snead. The Rules of Golf do not specify that it is required to play golf in shoes, but most players will want to go around the course with their feet clad. The Rules of Golf also do not require that any special footwear is worn to play the game at any level. Celebrated architect Pete Dye, creator of the Stadium Course at TPC Sawgrass that hosted this year’s Players Championship, always plays golf in sneakers. Most players, however, will choose to play in shoes designed for golf. Those first “golf shoes” were homemade contraptions in the middle of the 19th century. Golfers hoping to achieve better traction during their swings would pound tiny nails into the soles of their everyday boots. Depending on the talent of the craftsman, these nails could push into the golfer’s foot with predictable consequences. In 1891, as the game was gaining a foothold in America, golf shoes were introduced with short spikes that could be screwed into the sole of the shoe with a wrench from the outside.

The feet of golfers everywhere were saved, but greenskeepers were not rejoicing. The widespread popularity of golf spikes wreaked havoc on putting surfaces that became scraped and gouged by careless steps. It took almost 100 years for an innovation to come to the golf shoe in the form of molded plastic spikes. These nubby tips provided traction without digging into the greens like their metal forebearers had done.

The primary benefit of golf shoes is to provide traction, so the golfer’s feet do not slip in the middle of a swing. Not everyone was convinced that plastic spikes could deliver this benefit, and so while metal spikes were banned from many courses for regular play, tournament competitors were permitted to continue using metal spikes. Many PGA Tour professionals held on to their metal spikes because they believed they provided the best stability during the golf swings with which they were earning a living. By 2010, the golf world was fully converted to the plastic golf spike. At the Masters that year Fred Couples, known for a perpetually bad back, showed up wearing soft-soled, spikeless shoes that gave him more comfort while walking the hilly Augusta National Course. He also played lights out golf. Couples’ performance led many recreational golfers to question the advantages of spiked and spikeless golf shoes. 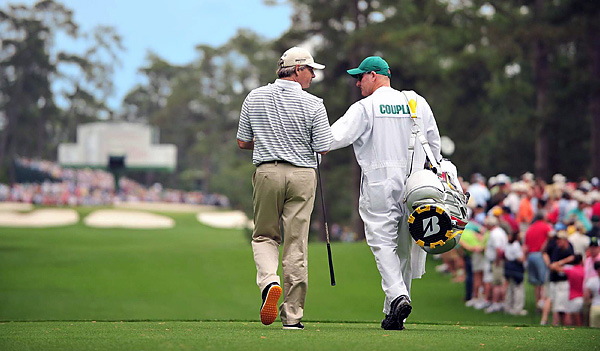 The comfort revolution in golf shoes began in earnest. Manufacturers started crafting golf shoes to a players’ feet rather than expecting players to adapt to their rigid shoes. Golf shoes became lightweight with flexible soles and stylish hybrids emerged that can be worn on and off the golf course. Pros also eagerly embraced the arrival of the spikeless golf shoe, ensuring its popularity across the golfing spectrum.

Do You Need Golf Shoes?

Anyone can play golf without golf shoes, there is no rule that forbids it. If a golfer never sees an early morning tee time when the course is dressed in dew or never plays a round of golf in the rain, an everyday running shoe would do just fine. On the other hand, there is a reason leading shoe manufacturers such as FootJoy, Adidas, or Nike put as much technology into designing footwear as golf clubs and balls – a good golf shoe can save you strokes in the unforeseen situations a player encounters on the course.

Beyond the advantages of traction on wet or uneven turf, today’s golf shoes are designed with built-in stabilizers that help prevent shifting during a golf swing. Technologically-infused golf shoes deliver the foundation that supports the body rotation critical for weight transfer and a proper golf swing. The torque generated in the modern golf swing demands that the body is anchored firmly to the ground, and the best way to accomplish that is with the modern golf shoe.