Top 10 Moments of Masters Past 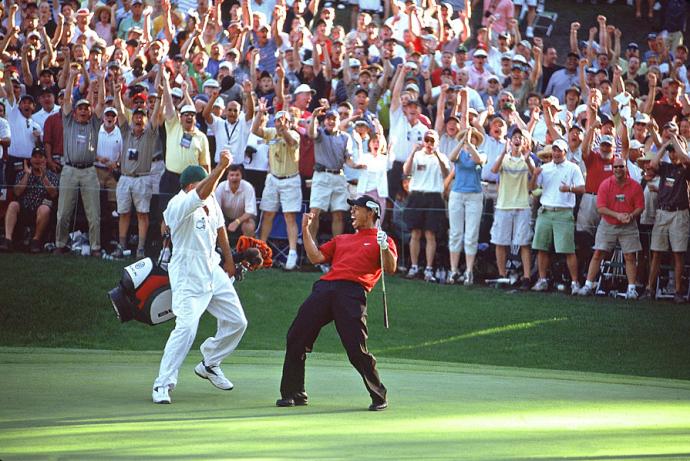 81 years ago, the first Masters teed off beneath the pines at Augusta National Golf Club in Georgia. Since then, the Masters has been home to some of the greatest sports moments of all time. With the first round of the 2015 Masters kicking off, we decided to put together a list of our top ten favorite moments of Masters past.

10. Larry Mize’s Amazing Chip – The 1987 Masters was a rough one for Greg Norman. His excruciatingly close putt on the 18th during the final round opened up the door for Larry Mize to post a birdie, forcing a three-way playoff. Mize went on to sink a miracle 140-foot chip shot in sudden-death play, winning the Masters.

9. Scott Hoch Buckles Under Playoff Pressure – The 10th hole of the 1989 Masters is one Scott Hoch will never forget. What should have been a simple putt just two feet from the hole during a final-round playoff turned into a missed opportunity, allowing Nick Faldo to post his first Masters win.

8. Greg Norman’s Collapse in 1996 – Speaking of Nick Faldo, the pro-golfing Englishman has a way with stealing away dreams of green jackets from other players. It was the 1996 Masters where Faldo – following a cringe-worthy implosion by Greg Norman – went on to win his third Masters title.

7. Ben Crenshaw Overcomes Heartache For The Win – Mourning the loss of his coach and mentor Harvey Penick, who had passed away the Sunday before the Masters was set to begin, Crenshaw won the major tournament for the first person to put a golf club in his hands, charging through the 1995 Masters in true resolute form.

6. Tiger’s First Masters Win – 1997 would mark the year that Tiger Woods took home his first of many green jackets, as well as several broken records. The 21-year-old golf pro became the youngest ever champion to win the Masters, posting the lowest ever 72-hole score, all while winning by the largest margin of victory of 12 shots under his closest competitor, Tom Kite.

5. Louis Oosthuizen’s Double Eagle – The 2012 Masters would be one for the record books, as Louis Oosthuizen sank an amazing second shot on the second hole of Augusta National, marking the first-ever double eagle on Pink Dogwood from 253 yards out – the longest double-eagle shot in Masters history.

4. Mickelson Finally Takes Home The Green Jacket – Phil Mickelson’s long-awaited first major win would come at one of the pro golfer’s most beloved courses during the 2004 Masters tournament. Despite his excellent record and phenomenal performances, Lefty had been winless in his previous 46 major starts, making his 2004 achievement long overdue.  https://www.youtube.com/watch?v=nCFZdFuyQdw

3. Tiger Woods’ 4th Consecutive Major – 4 majors, 4 consecutive titles. There’s a first time for everything, and Tiger Woods has never been hesitant to break a few records throughout the course of his career. The 2001 Masters marked the site of the golf legend’s major achievement, having won four majors in a row. What would later be dubbed, “The Tiger Slam,” the accomplishment is arguably one of the greatest in the history of the game.

2. Jack Nicklaus Secures His Last Green Jacket – The 1986 Masters would be remembered as the major where one of golf’s greatest players came from behind, defied age and beat the odds for one last Masters victory. Jack Nicklaus won his 6th and final green jacket at the ripe old age of 46. His birdie on the 17th hole was one of the Golden Bear’s most memorable moments at Augusta.

1. Tiger’s Amazing Birdie on the 16th Hole – Our favorite Masters moment takes us back to the 16th hole at Augusta National in 2005, where Chris DiMarco was giving Tiger Woods a serious run for his money. Nothing short of an incredible performance would beat DiMarco, and Tiger certainly didn’t disappoint, sinking a nail-biting, slow-rolling chip shot from the fringe of the 16th green to birdie the hole. It’s one of the most surreal moments from the Masters that resonates across the entire world of professional sports, and is easily one of the best pro sports clips of this century.

The Masters has long been a tournament where the best golfers in the world come together for a shot at greatness under the Georgia pines, where true grit is tested, and where legendary golfers are made. Hopefully the 2015 Masters will have golf balls flying  far and fast, and force us to make some revisions to next year’s “Top 10 Masters Moments” list. Until next time, we’ll be watching.