The ‘Tiger Woods Effect’ Is Real

The last time the PGA Tour had a Saturday telecast for a non-major draw as big an audience as this past weekend’s Valspar Championship, Jordan Spieth was 12 years old and probably glued to his television watching the WGC-Bridgestone Invitational. Having missed the cut in this year’s Valspar, Spieth was probably watching on television once again.

The common denominator for the two record-breaking tournaments is that Tiger Woods was atop the leaderboard in both events. After months of debate in golf grill rooms everywhere about whether Woods would ever win another tournament, here he was stalking his 80th win for the entire weekend. Gone were the chipping yips that plagued his comeback last year. Gone were the grimaces of pain and grabbing an offending body part after a swing. In fact, on one drive during the Valspar, Woods recorded the fastest swing on Tour this season – 129.2 miles per hour.

For the young stars of the PGA Tour who grew up watching Tiger Mania from their living rooms, the Valspar was their opportunity to witness it first hand in Tampa. Crowds surrounding each hole were five deep, then ten deep as word of another Woods birdie circulated around the course. “Tiger brings a palpable energy that can’t quite be described to those who haven’t seen it,” explained Andrew George, the director of the Honda Classic.

Tiger Mania even tamed a new medium that wasn’t around in his unparalleled prime – streaming. The Golf Channel/NBC Sports digital platform reported 27.2 million minutes streamed during the Valspar, a record for a PGA event. Not bad for a player who only played 14 tournament rounds in the past year and only broke 70 twice.

Woods ultimately came up one shot shy of claiming the Valspar Championship but not before rolling in a 39-foot birdie on the 17th hole that rocked most of west-central Florida. There is no more discussion of whether Tiger Woods will return to winning form – he is officially back, and a dark shadow has already fallen over the rest of the circuit. 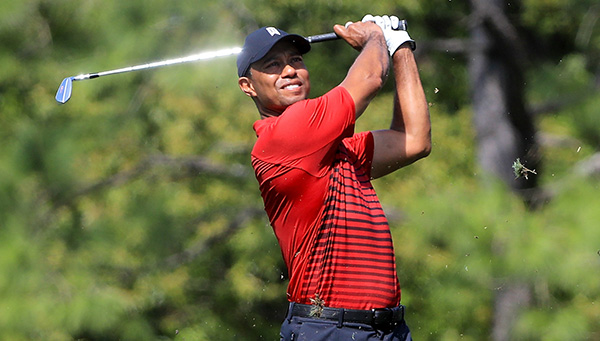 Does anyone remember World Number One Dustin Johnson anymore – who won the first tournament of the year by eight strokes? How about phenom Justin Thomas who has won seven times in his last 32 starts? There have been emotional comeback wins this year by Jason Day and Phil Mickelson, who reached the winner’s circle at the age of 47 for his first title since the 2013 Open Championship. “He’s always one-upped me in my career, and I wouldn’t be surprised if he came out this week and won,” Mickelson said good-naturedly about Woods before the Valspar. “Just to one-up me again.”

Mickelson did not quite prove to be a golfing Nostradamus, but the Woods bandwagon is now careening out of control. His world ranking has improved from No. 1,199 four months ago to now No. 149. The odds in Las Vegas on the 42-year old Woods to win next month’s Masters dropped twice in one day last week. He is now the third favorite to don the green jacket after Johnson and Thomas. Woods is also now the overwhelming favorite to win the Arnold Palmer Invitational at Bay Hill this week, where he has already won eight times.

The Bay Hill appearance will be the first time Woods has tried to play consecutive weeks, and thus there will still be questions concerning his rebuilt body. If he sails through this tournament, the build-up for the Masters will approach frenzy level with a rejuvenated Mickelson and Woods joining the formidable mix of young PGA stars. Already there are reports that Masters day badges that normally go for about $1,100 a day are fetching twice that amount.

Regardless of whether Tiger completely returns to his old form, both golf fans and promoters alike can certainly agree that it’s good to see him back on Tour. What’s more, you could win a free private golf lesson with the man himself during the Golfballs.com Tiger Woods Sweepstakes. And if you don’t get win a chance to hit some balls with Tiger, you could win a free dozen of Bridgestone TOUR B personalized golf balls. Enter below for your chance to win!