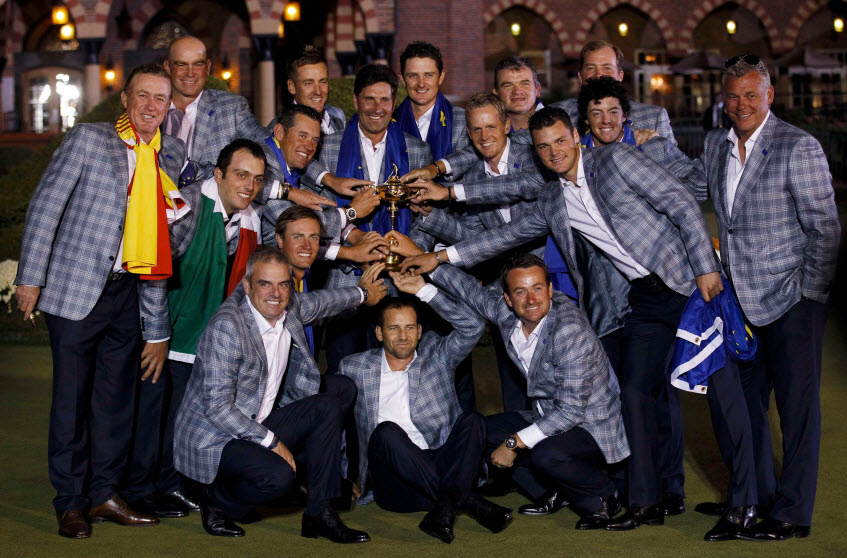 European dominance at the Ryder Cup is turning into an established tradition that’s making people wonder whether the Americans will truly ever steal their prior glory back.

The 2014 Ryder Cup held at the Gleneagles Hotel in Scotland was no exception, with European supremacy taking hold early on and never looking back over the course of the three-day weekend.

This year’s Ryder Cup victory for Team Europe – helmed by Captain Paul McGinley – marked the 8th win over the last 10 Ryder Cups for the European team, and was the culmination of some brilliant play among the European team members. The United States wasn’t completely absent, however, with the youngest players making this year’s Ryder Cup team drawing some much-deserved attention from their performances overseas.

Let’s take a look at the players that grabbed the 2014 Ryder Cup spotlight.

There’s a reason why many speculators were calling for a Team Europe Ryder Cup win long before the tournament was held.  With four of the six best golfers in the world playing for the Europeans – including the likes of top golfer Rory McIlroy and the No. 3 ranked Sergio Garcia – this team had a lot of talent under its belt going into the matches.

Rory McIlroy was especially impressive during his third day outing, blazing by the USA’s Rickie Fowler by hitting birdie on the first hole of the Sunday singles and staying on top throughout the match, leading his team to win the first point for Europe on Sunday.

No question that Rory and company were riding Friday’s momentum set by Justin Rose and Henrik Stenson, two close friends and colleagues that together tacked two points onto the European board after Friday’s alternate shot competition, comprising an impressive share of Team Europe’s 5-3 lead after round one.

Their performance solidified McGinley’s pairing choices for the weekend event, as the Team Europe Captain had previously stated that, “These two guys are together for a particular reason.  It’s based on my understanding of them as people as well as golfers.”

Another Ryder Cup star native to the European continent was Germany’s own Martin Kaymer. On the last day of the tournament, he chipped in his TaylorMade golf ball for a match-ending eagle on the 16th during day three’s competition, capturing the attention of commentators, fans and golf pros around the world. His competitor, the formidable Bubba Watson, was left in the dust.

No article would be complete without referencing Jamie Donaldson, the 38-year-old Welshman who claimed the final point of the 2014 Ryder Cup for Team Europe. He put the final nail in the Americans’ coffin with a brilliant wedge shot from 146 yards to within a foot of the 15th hole during Sunday’s round.

When asked by a reporter the following morning if he had digested the news yet that he had claimed the winning point for the Ryder Cup, Donaldson honestly replied, “No.  Because I’m still drunk.”

While we know the European team had a lot to celebrate – and celebrate they did – after Sunday’s Ryder Cup victory, Team USA did have some highlights of their own, particularly among some of the youngest golfers to make the team.

Several people must’ve been wondering over the weekend whether or not Patrick Reed knew that the USA was fighting an uphill battle.  The 24-year-old Ryder Cup rookie never signaled defeat over the course of the tournament, going 3-0-1 for the week while taking down Henrik Stenson and his Callaway clubs during Sunday’s match.

Definitely Team USA’s standout player, Reed made a name for himself as a competitive golfer with a sense of resolve and determination that will undoubtedly move his career further into the limelight in the years to come.

Reed’s name is also being used synonymously with 21-year-old Jordan Spieth’s – the youngest half of the Reed/Spieth pairing that posted 2 ½ points out of 3 during the first two days of play.

With so many young players stealing the spotlight during the 2014 Ryder Cup, it’s encouraging to know that the future of biennial competition appears to be in good hands.