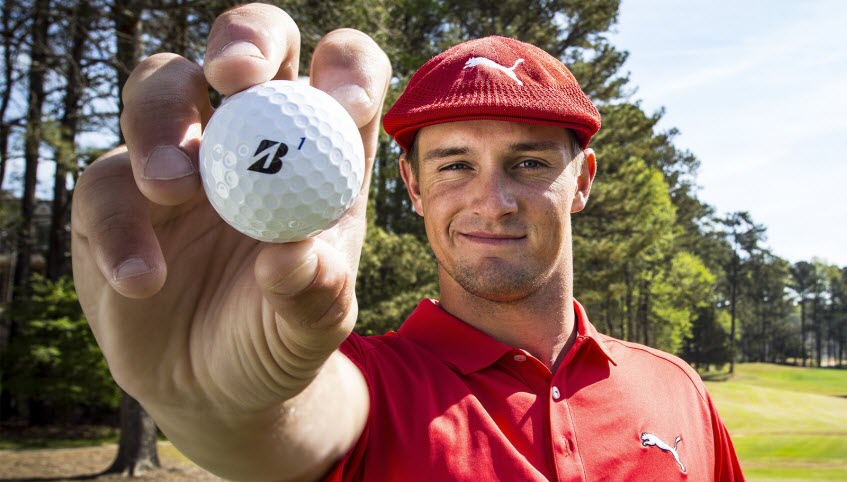 Are you still talking about the Big Three? That was 2015, and the next big thing is already here. This time however, we aren’t talking about reawakening echoes of golf’s past. This time the buzz is all about an entire golfing revolution.

Unless you’re a big SMU Mustangs fan or follow the U.S. Amateur, chances are you didn’t meet Bryson DeChambeau until he was haunting the leaderboard at the Masters and was removing his beret-style hat to get into Butler Cabin. If so, it’s time to catch you up on the Bryson DeChambeau story.

Not Your Typical Journey to the PGA Tour

DeChambeau grew up in the hot, dusty Central Valley of California. His father Jon played the Tour for a bit in the 80’s and finished ninth at the Phoenix Open one year, but soon joined the Titleist staff and plied the club pro side of the sport. Bryson was a precocious athlete who excelled at soccer and basketball as a kid, but he was drawn to golf – where the final results would depend solely on his performance and not that of his teammates.

Young Bryson was known as much for his wizardry at math as a five-iron. By the age of 11 he had already plunged into the cerebral side of the game, soaking up the teachings of eccentric club-making guru David Edel and local swing theorist Mike Schy. Both were disciples of a cult instruction book called The Golfing Machine, written by Homer Kelley in 1969. The book explained in detail the scientific basis behind each movement of the golf swing. DeChambeau got his hands on The Golfing Machine when he was 15 years old and memorized every word.

Growing up, DeChambeau didn’t travel the national junior circuit and unlike noted California schoolboys before him, Phil Mickelson and Tiger Woods, he didn’t pile up a closet full of trophies and recognition. He did well locally, but was never in a position such as a 12-year old Woods who when asked by a reporter how many trophies he had won responded, “I quit counting after 11-and-under. I had 110 trophies. I threw them all in the garbage.”

Whatever success DeChambeau achieved was jeopardized by his quest to discover a single, repeating swing plane throughout the bag. His big revelation came in his senior year of high school when he decided to play with irons that were all cut to the same length – 37 1/2 inches like a 6-iron – and all had the same weight, 282 grams. It was a number he had arrived at through his ever-calculating math brain.

The experiment and its indifferent results scared off recruiters from big-name golf schools, and DeChambeau wound up teeing it up for Southern Methodist University in Dallas. He continued to struggle with his one-size-fits-all concept, and won just one college event in his first two years. However, it all came together his junior year when DeChambeau captured the NCAA Individual title and the United States Amateur. The only other golfers to pull of that double have been Mickelson, Woods, Ryan Moore and an old-timer named Jack Nicklaus. 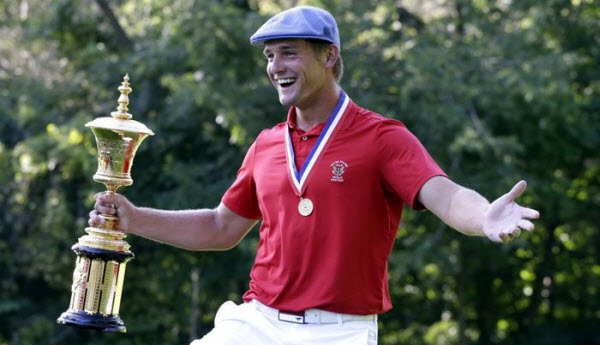 Forced to Turn Pro, Sort of

Southern Methodist University, the only NCAA school ever given the “death penalty” and forced to shut down its football program for repeated recruiting violations, ran afoul of the watchdogs in golf as well in 2015 and the school was barred from the NCAA championships. Unable to defend his title, DeChambeau elected to leave school but didn’t turn pro since doing so would forfeit his free pass to the 2016 Masters by virtue of being the reigning U.S. Amateur champion.

Instead, DeChambeau entered some pro tournaments and did well enough to forfeit about a half-million dollars in winnings. There were in-the-money finishes on the PGA Tour and the European Tour, and a tie for second at the Australian Masters, but he wound up tied for 21st at Augusta and that $110,000 check would be the last one Bryson Chambeau would have to forego. He recently joined a team of Tour pros in playing Bridgestone golf balls. And he’s already signed a lucrative equipment deal with Cobra–Puma, the company that makes his custom single-length, single-weight irons, and finished fifth in his first event as a pro at Hilton Head. DeChambeau pocketed $259,600 and chartered a private plane to fly home from South Carolina. Wags noted that Tiger’s first payday was $2,544; Phil’s was $4,400 and Nicklaus went out on the town with $33.33 in his pocket from his first pro winnings.

On the Verge of Revolution?

Bryson DeChambeau would be costing fellow 22-year old Jordan Spieth a few headlines, even without the single-length clubs and out-of-the-gate success. He majored in Physics while at SMU, and for recreation he likes to walk tightropes. He can even sign his autograph in cursive backwards and upside-down with his left hand. Before going out to play, he floats his golf balls in Epsom salts to determine which ones are perfectly round. He bears that beret cap like the ball-striker he strives to be – Ben Hogan.

But the single-length golf clubs are what has the golf world chattering about DeChambeau. While it’s not a new concept, it’s an uncommon one. Single-length clubs were a commercial failure for Tommy Armour Golf in the 1980s, but there was no unique fitting system back then – no computer models, and no real technology brought to bear at all – just the idea. Bryson’s success with the club forces experts to parse over single-length sets anew.

So far, the consensus seems to be that DeChambeau is unique to be able to perform at an elite level with irons all the same size. Nevertheless, the same consensus is that such a set does make it easier to achieve a consistent, repeatable swing plane that would benefit beginners. There is no need to adjust ball position, posture, and stance for every club through the bag. The biggest obstacle to the growth of golf is that it’s so frustrating to play at the start. If a single length set gets nascent golfers to hit the ball in the air easier and more often, a revolution could well be in the offing.

And DeChambeau just might be the guy to lead it.