How Golf Balls are Made 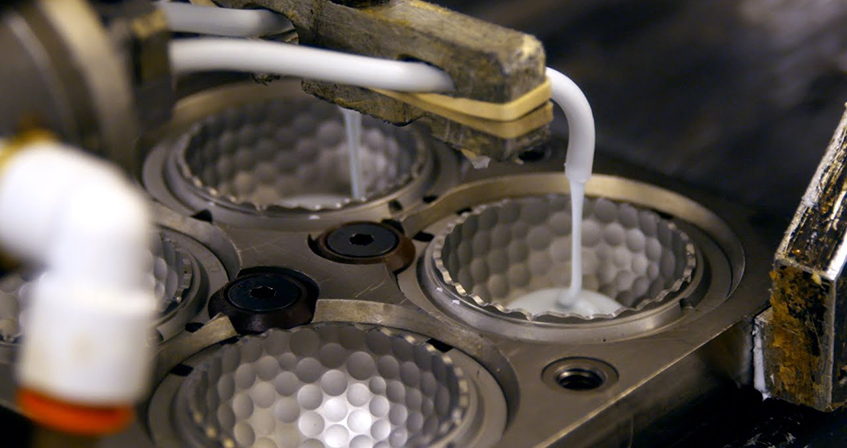 Many observers of the game of golf, including the legendary Jack Nicklaus, are advocating for the powers that be to roll back how far the golf ball travels. Well, what form would that take? Golf could go back to the ball that was used for hundreds of years. It was called a “featherie” because it was constructed of a leather pouch stuffed with boiled goose feathers and stitched together. Requiring the use of a featherie would certainly put the teeth back in overmatched golf courses, especially in the rain. Imagine how far you could propel the equivalent of basically a wet pillow down the fairway with a driver.

The Emergence of the Modern Golf Ball

In an effort to protect the goose population, (and get more distance) golf balls in the mid-1800s began being constructed with a cover of gutta-percha, a naturally occurring rubber that could be extracted only from the dry sap of the Malaysian sapodilla tree. That is a bit specific and since there are exponentially more golfers today than in 1870, probably impractical. In 1899, Coburn Haskell and a frequent playing partner who helped make tires for B.F. Goodrich, Bertram Work, created a golf ball with a core that featured yards of rubber bands wound tightly around a small center, usually filled with liquid. The Haskell ball quickly dominated the game. Bobby Jones saw little handicap in using the Haskell ball as he routinely delivered tournament scores in the 60s with wooded-shafted clubs. With modern technology, today’s wizards of the fairways could certainly approach that degree of mastery with a Haskell-type ball.

How Golf Balls Are Made

Golf, however, is not likely to dial the clock back to the age of the Haskell ball anytime soon. The modern golf ball has abandoned the use of wound rubber bands in the 21st century. Today’s golf balls are made with solid core construction. In its simplest iteration, the manufacturing process begins with a molded core that is injected with a hot plastic that cools to form a cover. The cover is stamped with a dimple pattern that will lessen the impact of the air on the ball in flight. The pattern of dimples affects how a golf ball will fly. A perfectly smooth golf ball would travel shorter distances since it is affected more by the atmosphere – a hint as to what the future of golf balls may look like if distance restrictions are imposed. This process results in the “two-piece” ball. Golf ball engineers tweak this process by adding additional layers of varying hardness. Three and Four layer balls are common, and TaylorMade Golf introduced the first five-piece ball, the Penta, in 2009. Now, the current TaylorMade TP5 and TP5x are found the bags of many PGA Tour pros. 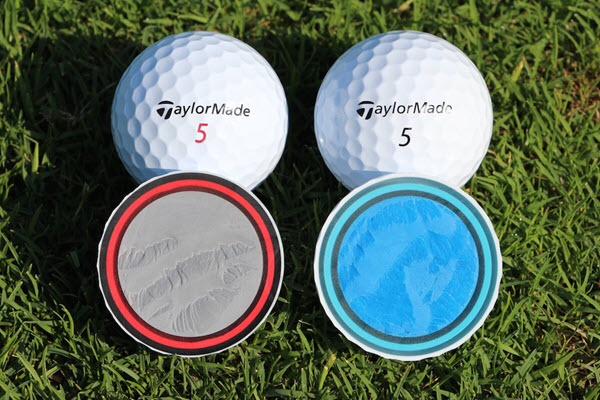 Once the cover cools, the ball is swathed in a glossy coat of paint and allowed to dry. The cover is then eminently receptive to custom logos or any personalization you want to put on your golf ball.

What Are Golf Balls Made Of?

The guts of a modern golf ball still harken back to the elasticity of rubber. The bands have been replaced by high speed molded rubber cores. Additional layers often referred to as mantles, can be rubber or plastic depending on how the golf ball is engineered. In the 1980s the DuPont Company came to the rescue of hackers everywhere when it invented a golf ball cover fashioned out of a thermoplastic resin, branded “Surlyn.” The synthetic-covered balls are impervious to any abuse delivered by a golf club; they will not cut and will remain in the round and playable until they are lost. Top of the line golf balls features an alternative covering made of softer urethane. Urethane-covered balls are also durable but have the added benefit of imparting more spin after contact with the club, permitting greater control of the shot. It is the varying combinations of the layers and the cover materials that give golf balls the unique performance characteristics that can be tailored to any golfer’s game.