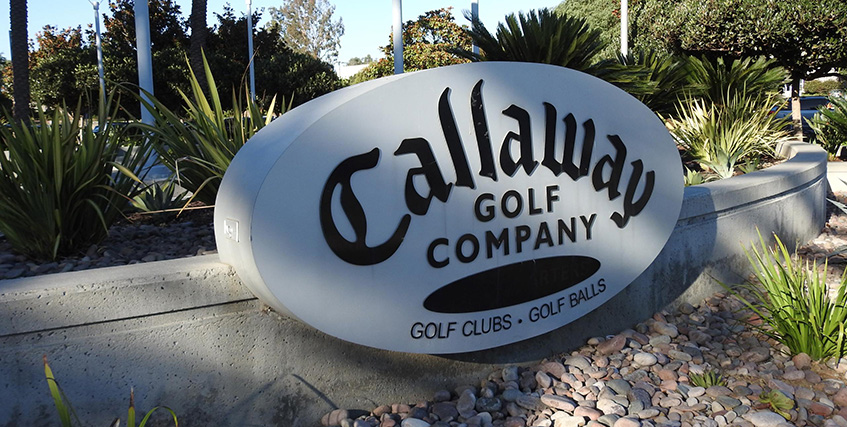 The History of Callaway Golf

The buzzword in today’s business world is “disruptor.” Investors are all on the lookout for the next idea that will revolutionize an otherwise business-as-usual industry. The founder of Callaway Golf, Ely Reeves Callaway, was a disruptor way ahead of his time. He shook up not one but three industries, each many hundreds of years old.

Callaway entered World War II in the Army Quartermaster Depot in Philadelphia. He became so efficient in his supply job that he was commissioned a major at the age of 24 – the youngest in the Quartermaster corps – and put in charge of procuring all the Army’s cotton goods for the duration of the war. He penned his name to contracts totaling more than $700 million a year. Callaway was recruited into the textile industry after the war, eventually rising to president of Burlington Industries, then the largest textile company in the world. Callaway was responsible for developing the first blend of polyester and worsted wood fibers called Viracle, introducing an easy-to-care-for worry-free fabric that was ideally suited to the new leisure culture of the post-World War II era.

When Callaway was passed over for chief executive officer of Burlington Industries in 1973, he retired to 140 acres he owned in Temecula, California. He wanted to grow grapes and start a winery on his Southern California property, but the conventional wisdom was that the climate would never support such a venture. Callaway hired agronomists to work his soil and developed techniques to nurture his vines. His first white wines – favored by Queen Elizabeth – were soon the talk of the oenological world. Callaway’s success encouraged would-be vintners across America so that today it is not unusual to discover wineries in locales far beyond Napa Valley. 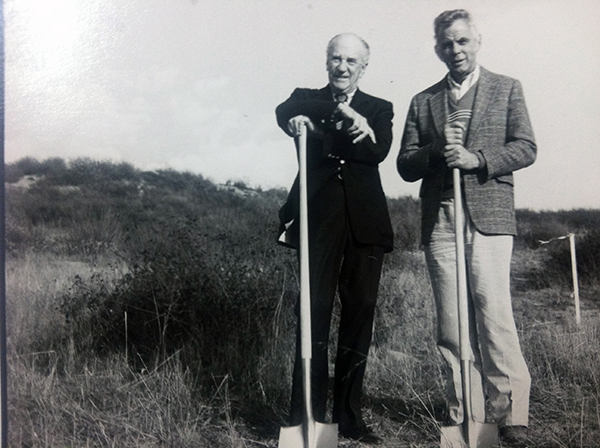 Ely Callaway and John Moramarco at the Start of Callaway Vineyards in Temecula, California, image: winebusiness.com

Ely Callaway’s interest in wine was sated by 1981 when he sold his business to Hiram Walker for $14 million. He was 62 years old with more time for an enduring passion – golf. Callaway played golf growing up in the Atlanta area and his mother was a cousin of the famous Bobby Jones. He won the club championship at Highland County Club four years running from 1936 to 1939, before heading off to war and his business career.

Now, he was just playing for fun when he spotted some hickory-shafted clubs in a pro shop in Indian Wells, California. These were not handcrafted relics from an earlier age but clubs with a steel shaft bored into the surrounding wood. Callaway played a round with the clubs and was entranced. Two weeks later he bought the struggling Hickory Stick U.S.A. company and changed the name to Callaway Hickory Sticks. The clubs were an enchanting product, but there was no way they were going to transform the golf world. No one saw professional golfers trying to make a living at the game using Callaway Hickory Sticks. There was nothing about the clubs that promised superior performance.

The History of the Big Bertha Driver

The transformation of Callaway from a company that once sold quirky clubs into a mainstream golf manufacturer took place in 1991. For the previous 500 years, golf woods were constructed with exactly that – wood. The club heads were fashioned from applewood, pear wood and, most often, persimmon. Ely Callaway, just as he had done with wines and fabrics, came up with something completely different. His company started making drivers with lightweight steel heads. The savings in weight made it possible to make larger club heads that transformed the driver from one of the hardest clubs to hit in golf to a more forgiving weapon. The steel also sent drives further down the fairway than its wooden counterparts.

One of Callaway’s biggest challenges was what to name the new club. The prototype was called “The Cannon,” but Ely Callaway remembered a picture from his youth of a German World War 1 howitzer that had to be deployed on a railroad car called “Big Bertha”. The release of Callaway’s new Big Bertha Driver almost wiped out persimmon head drivers overnight. By the end of the 1990s, the Big Bertha was the driver of choice on all the world’s major golf tours, making Callaway Golf clubs a necessity for golfers everywhere. The success of this driver was so important that Ely Callaway aptly titled his autobiography Big Bertha and Me. The one naming challenge Callaway was not able to solve was what the golf world was going to call the new clubs – a quarter century later the game’s non-irons are still called “woods” and probably always will be.

Within years of the introduction of the Big Bertha, Callaway was the world’s largest maker of golf clubs. The Big Bertha brand appeared not just on drivers but iron sets for men and ladies as well. The Big Bertha Irons replaced the S2H2 Callaway irons that had been the company’s first foray out of the Hickory Stick era in 1988. The coming of the Big Bertha also ended the run of those wooden shafts in 1992.

Innovation was his trademark, and Ely Callaway found himself constantly butting heads with the standards enforced by the United States Golf Association and the Royal & Ancient Golf Club of St. Andrews. When the company finally landed within accepted guidelines, it produced bestsellers like the Steelhead X-14 irons. The Steelheads garnered affection for their sleek, rounded profile and improved performance on off-center hits.

Ely Callaway was always a leading proponent of separate clubs for professionals (adhering to the standards of golf’s ruling bodies) and clubs for less skilled amateurs (anything goes). His company produced traditional forged irons for the top players in the X, Diablo, RAZR, and Apex lines while also serving the player development market with popular cavity back offerings as well.

In 1997, Ely Callaway stepped away as CEO of Callaway Golf to start a new venture within the company called Callaway Golf Balls. The company introduced its first golf ball, the Rule 35, in 2000. Predictably, the Rule 35 was the first golf ball on the market to feature ionomer layers and a thin urethane cover. These materials would become standard over the course of the next two decades but despite receiving good reviews from players and Tour professionals, sales never reached targets. Shortly thereafter, Ely Callaway contracted pancreatic cancer and died in 2001 at the age of 82.

The founder’s death no doubt hindered Callaway’s ascendancy in the golf ball game for a few years. By 2010, Callaway settled into the number two spot behind Titleist in the golf ball market with top-sellers including its two-piece Warbird and premium four-piece Tour line. In recent years, Callaway has led the charge into low-compression “soft” golf balls with its Chrome Soft introduction in 2015. Given the company’s track record with innovation, it is no coincidence that Callaway kicked off this trend with the tagline, “the ball that changed the ball.”

Given Callaway’s history of innovation, no telling what the company will come up with next. But we can’t wait to find out.