By definition, a hybrid is “a thing made by combining two different elements.” In golf, those two elements combined to create a golf club with the best playability characteristics of both irons and woods.

The profile of a hybrid club shows a wood-like club head with a wider sole at the bottom and a larger sweet spot on the face. That face does not bulge like a typical fairway wood, which can produce sprayed shots when not struck perfectly. The hybrid face is instead straight, like an iron. This gives a hybrid club a hard and flat surface to deliver squarely struck blows down the fairway.

Hybrid clubs are also shorter in length than traditional woods, providing more control in the swing. Whereas a 5-wood measures 42 inches in length, (only two inches short of a driver) a hybrid is never more than 39 inches, the length of a long iron. Hybrids draw more features from irons including lighter weight and an offset face, mimicking the appearance of the short iron scoring clubs.

Hybrid clubs are designed to replace the long irons in a golfer’s bag. Long irons, with their tiny heads and small lofts, have always been the bane of the average golfer. When addressing the ball, it’s not uncommon for a handicapper to immediately doubt the potential to get the shot airborne. With the seed of doubt already planted, the long iron shot rarely comes off as planned.

Club manufacturers offer more with hybrid technology than just “an iron that looks like a wood.” The center of gravity on the club face is shoved low and towards the back which creates a club with maximum forgiveness. The hybrid club should ideally be swung like an iron, and the added help delivers shots that are easily pinched from tight lies in the fairway.

Where the hybrid really outshines iron clubs is in the rough. The average player simply does not have the arm strength to swing an iron through thick grass while keeping the clubface perfectly square. Designers have outfitted the hybrid club with the sharp cutting front edge of an iron with the larger head size of the wood to enable golfers to pack a punch out of these bad lies with less effort. Some hybrids even sport runners on the sole to facilitate this very task. It is no wonder some hybrids are sometimes marketed as “rescue clubs.”

The versatile hybrids also stand in for irons around the greens. Short pitches and chips can breed a wide assortment of golfing ills – the chili-dip and shank prominent among them. Hybrids, with their short length and higher lofts, can easily lift balls onto the green and start them rolling quicker than delicate shots with irons. 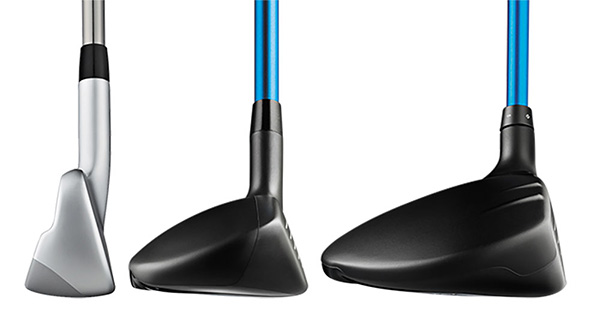 Hybrids are numbered like irons and typically travel between five and 10 yards further than their iron counterparts. When shopping for hybrids, a good rule of thumb is to seek a higher number hybrid. For example, a 5-hybrid to replace a 4-iron. It is also important to remember the average player will be making more consistent contact with a hybrid of the same number as an iron, so the new club will be performing better than its traditional counterpart, requiring “less stick.”

Hybrid technology will result in shots that fly higher and roll less. Lofts on hybrids can be found from 18 degrees (like an old-fashioned 4-wood) up to 24 degrees. That range enables hybrids to cover approximately 50 yards in a golfer’s bag. The versatility and ease of use of these clubs have made them a popular innovation in golf since their introduction in the 1990s. To keep up, manufacturers are constantly updating and improving their products, making it possible to find a hybrid to suit almost any part of your game.