The Invention of Golf: Who, Where and When?

St Andrews, about 1740, credit to The Royal and Ancient Golf Club of St. Andrews, image: sportsheritagescotland.co.uk

Do you know who invented golf? If not, you’re not alone – no one does for sure. Ancient Romans playing controlled fades around Corinthian columns. Chinese hackers practicing chip shots off the Great Wall during the Ming Dynasty. Dutchmen in the Middle Ages banging balls across frozen canals. Shepherds whacking pebbles up and down Scottish sand dunes. Take your pick – all of these stories have been posited as golf’s origin story.

The History of Golf Timeline

If we are looking back to find a game that we recognize as golf, we must jump in the Wayback Machine and set the dial for Scotland in 1457. So many Scots were in this early golf-esque game that they were neglecting their archery practice – a sport the Crown relied on for defending the country’s borders. King James II, known as “James of the Fiery Face” (due to an unfortunate birthmark) banned the game thusly, stating: “Golfe be utterly cryed down and not to be used.”

James II would be blown up by one of his own cannons two years later, and so Scotsmen again picked up their forbidden sticks. But in 1471, his son James III put the ban back in place. James was stabbed to death in 1488 by a “mysterious figure” who may or may not have been an aggrieved handicapper. His son James IV carried on the family prohibition against golf, but he ascended to the throne at age 15. A more mature James IV caught the golf bug in 1500 and lifted the royal ban on the game. Two years later he made what is believed to be the first golf purchase when he ordered a new set of clubs carved from Scottish beech by an archery bow-maker.

Fast forward about 200 years and we have the first documented evidence of golf being played on a “course.” The Musselburgh Links outside Edinburgh, Scotland had seven holes in 1672, and the implement used to cut those holes into the ground measured four-and-one-quarter inches. Many years later in 1893, this would become the standard for all golf holes.

The oldest known rules of golf date to 1744 and were drawn up by The Honourable Company of Edinburgh Golfers, who played on five holes in a public park they called the Leith Links. The Royal and Ancient Golf Club of St. Andrews was founded in 1754 by linksters who had been playing the local golfing grounds since an ecclesiastical decree in 1552. 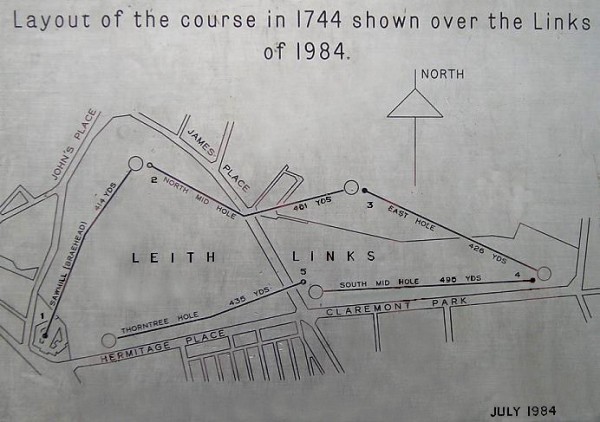 1744 Course Layout Over a Map of the Links of 1984, image: scottishgolfhistory.org

About this time the craft of club making began to drift permanently away from the local bowyer and towards dedicated golf club craftsmen. No longer would golf clubs be dismissed as “rude and clumsy bludgeons” in the hands of undiscerning linksters. James McEwan was a joiner and cartwright before opening a shop in Edinburgh in 1770 to make clubs for the Bruntsfield Links Golfing Society that had formed nine years earlier as the world’s fourth golf club. James was followed into the McEwan & Son Golf Club & Ball Makers business by Peter and Douglas and then three more Peters. Six generations of McEwans for 127 years signed their name beneath the company’s thistle mark logo. Ash was the wood of choice for shafts crafted by the early McEwans.

The Origins of 18 Holes

By the middle of the 18th century, the Royal and Ancients were playing a course of 12 holes. The holes were laid out in a line and 10 holes were played twice, once “out” and once back “in,”  a “round” of 22 holes. Other Scottish courses had seven holes or eight or nine. The Montrose Links would grow to as many as 25 holes.

When the first Open Championship was contested at Prestwick Golf Links in western Scotland in 1860, the course was 12 holes. Willie Park won the title with a 174 after three tours around the course. Meanwhile, the St. Andrews Links was evolving with double greens and holes combined to arrive at 18. Musselburgh had stabilized at nine holes. The Open Championship in its early years rotated among these three courses – two rounds at St. Andrews, three rounds at Prestwick, and four rounds at Musselburgh. 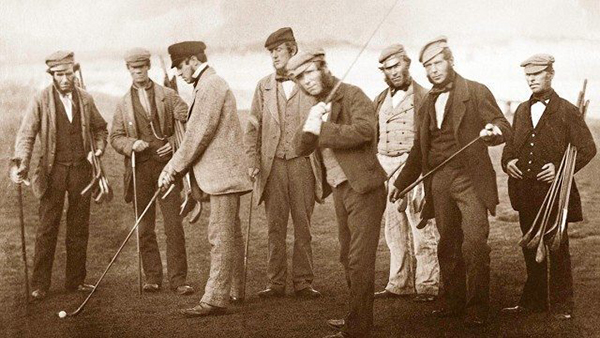 Prestwick expanded to 18 holes in 1882. The Honourable Company of Edinburgh Golfers, who ran the Open Championship, moved to their own private course from Musselburgh in 1891, the fabled 18 holes at Muirfield. There was never a “rule” that golf courses must be 18 holes, but now the three most prestigious courses in golf – St. Andrews, Prestwick and Muirfield – all had 18. The norm for a round of golf was thus established – and the game as we know it was ready for export much to the enjoyment of generations of dedicated linksters.