TaylorMade is the only manufacturer of five-layer golf balls, the TP5 and TP5x, on the PGA Tour. It sure helps to trumpet that fact when the best golfer on the planet, Dustin Johnson, reaches the World #1 ranking, playing your ball. Of course, the former World #1, Jason Day, also tees it up with TaylorMade TP5 golf balls. This five-layer golf ball design certainly works well for the game’s top players but will the average golfer benefit from using the TaylorMade flagship ball? Let’s take a look…

Is This Ball Revolutionary?

TaylorMade has been making a five-layer ball since the late 2000s, the Penta TP. As befitting a company that earns its stripes with the game’s most popular drivers, there had always been an emphasis on length with its golf balls. The five-layer ball had an ambitious mandate – work with every club in the bag to maximize performance.

For touring professionals distance is rarely the problem. They are after feel and workability around the greens, and the Penta TP was found lacking by many pros. To re-design the five-layer ball, TaylorMade shifted the emphasis of its legendary laboratory research away from clubs to the ball. The resulting improvements have the company excited that their new TaylorMade TP5 and TaylorMade TP5x balls have been put in play by pros on the PGA Tour, including #1 World Ranked Dustin Johnson.

Why Is This a Different Five-Layer Ball?

TaylorMade scientists spent most of their time experimenting with the three inner layers nestled deep inside the golf ball. The core was expanded and given a compression of 25 – very low, indeed. The outer core and the mantle are much harder, about a 55 compression. This rapid expenditure of energy in the “Tri-Fast” core builds tremendous energy and ball speed on full shots. 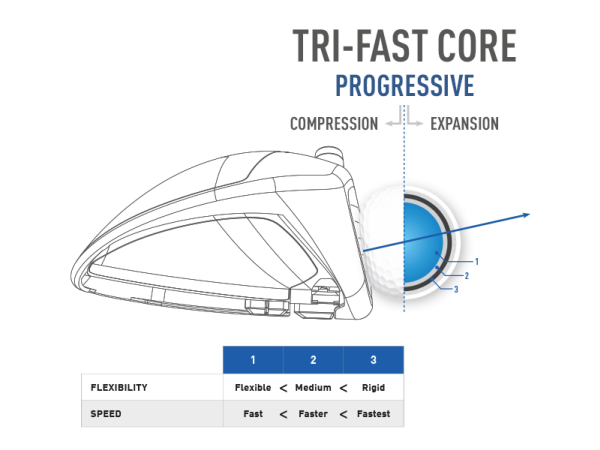 That energy is harnessed in the two outer layers, the “Dual-Spin Cover,” that is composed of a rigid inner-cover and a super-soft cast urethane cover. With contact, the pliable urethane is pinched against that inner core enabling the club to grab the golf ball better. Testing with the TaylorMade robots reveals that this combination acts to keeps the ball in contact with the club face a fraction of a millisecond longer to achieve the spin performance that top players demand. 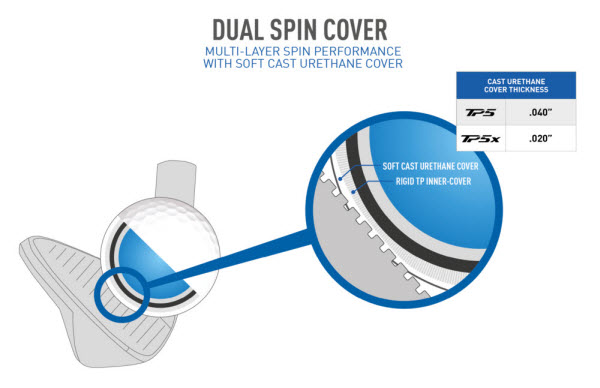 It is worth noting that a golf ball’s ability to hold a green with an iron shot is greatly enhanced if it flies far enough for the golfer to use a 7-iron instead of a 6-iron on approach shots. TaylorMade has that covered as well with the TP5 and TP5x as the Tri-Fast core configuration promotes a higher launch angle that reaches peak height with less spin. The result is a ball that performs well in the wind, turning that two-club wind into a one-club handicap.

TaylorMade TP5 or the TP5x: Which Is the Golf Ball for You?

TaylorMade has been chasing a golf ball design that optimizes both driver performance and iron performance for the better part of ten years. The high energy produced by the three inner cores delivers distance for the driver, and the malleable soft cast urethane creates greenside spin even on little shots executed without much force. The company is confident that the TP5 and the TP5x are the golf balls that complete that quest for maximum performance through the bag.

When shopping the TaylorMade pro-performance line, there are not many clues on how to choose between the TP5 and the TP5x by looking at the box. Here’s what you need to know: TaylorMade TP5x golf balls, have a compression rating of 90, typical of what most golfers are used to playing. The TP5 is a softer 83 compression version that will provide the softer feel and a mid-trajectory ball flight that will produce slightly less distance. The differences are minimal – personal feel will dictate the final choice.

The all new TaylorMade TP5 and TP5x golf balls are now available: