Urban Street Golf: What is it and can it last?

Upon first examination, urban golf (sometimes also called street golf, or cross golf if played in a suburban or rural setting) can appear to be the sport of dystopian future, adapted to a grassless or overpopulated planet doomed by a careless human race. Which begs the question: is urban golf merely a passing phase, or can we expect to hear the dulcet tones of Joe Buck and Greg Norman calling the action at the Urban Golf Major Championship on Fox Sports in 2020?

What is Urban Golf?

Before we get there, let’s take a step back and find out what this urban golf is all about. It is what it says it is – golf played not across a verdant countryside but through a city or suburban environment. Real golf clubs are used but since a course can wind down congested streets, around occupied buildings, or through neighbors yards, a variety of more object-friendly balls are used other than real Surlyn-covered missiles. Instead of “holing out,” urban golfers instead aim for targets. Rather than navigate around sand traps and ponds, hazards tend to be storm drains and rambunctious dogs that cannot resist a ball bouncing past the stoop. “Courses” typically have either nine or 18 holes, each one presenting its own unique set of challenges.

The Tools of Urban Golf

The typical quiver of weapons used by an urban golfer includes a driving iron (typically nothing longer than a 6-iron), a scoring iron (an 8- or 9-iron) and a wedge or putter. Most players like to pop the ball on the rougher surfaces to hole out, rather than wield a flat stick like normal golfers use for their greens work. Tennis balls, racquetballs, and practice golf balls like the ones from Almost Golf are popular alternatives, especially the “off-course” golf ball for cross golf that is marketed as being “neighborhood safe.” 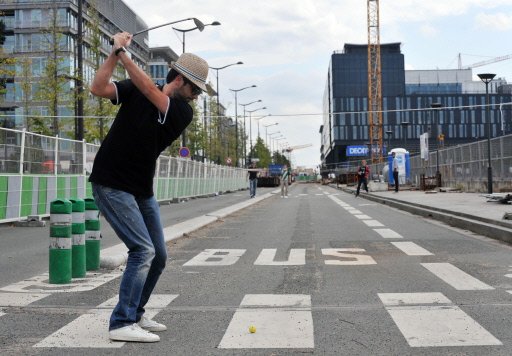 Cross golf (the most popular version played here in the United States) is being built at the grassroots level with the help of sponsors who are staging events on college campuses, encouraging intramural programs, and offering competitions that send winning schools to a 36-hole National Collegiate Intramural Championship each year in Las Vegas.

So, where is all this going? Is urban golf or cross golf the future of the game?

The Future or a Phase?

This game certainly has its pros and cons. Some naysayers believe cross golf is going to have limited appeal. It concentrates on the aspect of traditional golf that is the hardest – mastering the scoring irons. Every recreational golfer knows the magic pathway to better golf is to practice from 100 yards in or in smaller spaces. But how many golfers do you see on the driving range hitting hundreds of balls with mid-irons and short irons? Everyone is bombing the newest drivers as far as they can. Without giving golfers the chance to hit the long ball, it can be hard to see the popularity of cross golf soaring. Frustration over the inability to hit irons and post decent scores is also one of the factors that drive golfers away from the game, not towards it. 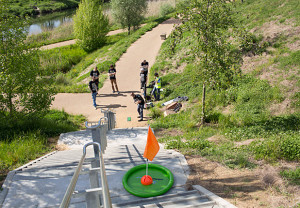 However, urban golf occupies a different niche. It has the attraction of universal participation in its corner, as almost anyone can successfully advance a tennis ball with a golf club, just like anyone can throw a disc to play a round of disc golf. Additionally, specialized equipment has been developed such as plastic saucer-like greens and flags for urban golfers who want to take their games beyond the recreational level. The game even has a major championship – the recently contested European Urban Golf Cup – that featured ten international teams (the United States had no representatives). Urban golf also attracts a different breed of players than the traditional game, as they’re often younger and enjoy the idea of street golf as “golf gone rogue.”

To date, urban golf in the United States has been seen as an activity for players to liven up the journey to the local pub. Those who think too much about everything have called urban golf a social commentary on the blight on society that is golf – a rich, restricted white man’s sport. If the game is relegated to only one idea, such as merely an exercise to get to the bar or a social statement, people will tire of that soon enough. But if participants are actually having fun playing urban golf and developing skills, there may in fact be a sound check at an urban golf “major” in Joe Buck’s and Greg Norman’s future.