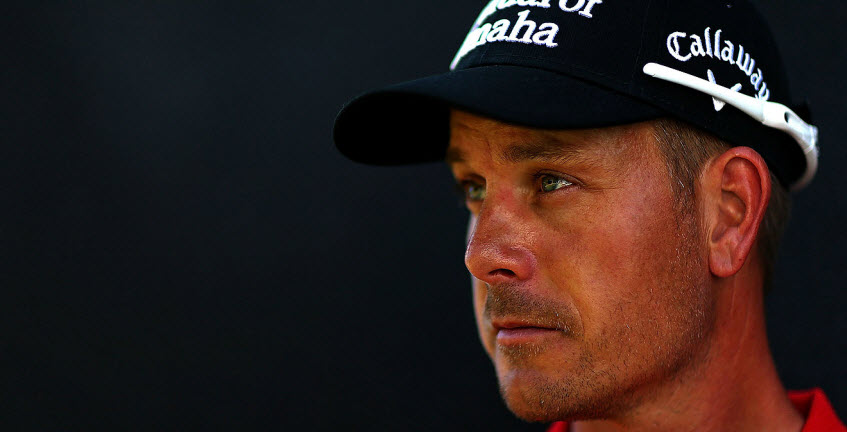 Henrik Stenson’s career arc from childhood to the Champion Golfer of the Year is unlike any other in professional golf. Growing up in Sweden his parents didn’t play the game and Henrik never touched a golf club until he was 12 years old. By that time, half a world away, an only four-month-older golfer named Eldrick Woods, was asked how many golf trophies he had. His reply was, “I quit counting after 11-and-under. I had 110 trophies; I threw them all in the garbage.”

Stenson’s games were soccer, street hockey, and badminton, and his sports hero was tennis great Bjorn Borg. But after getting his first taste of golf at a driving range he quickly earned the name “En Till Hink”, which in his native language translates to “One More Bucket.” The local golf pro told Stenson’s parents that the boy had promise so they uprooted the household in Gothenburg and moved closer to more demanding courses.

Even so, Stenson wasn’t much better than a five handicap by the age of 15, but he blossomed into a scratch player in his late teens and began representing Sweden in international competition. Stenson turned pro at the age of 22 and found immediate success on the Challenge Tour, the feeder tour into the European Tour, winning the 2000 Order of Merit.

Henrik Stenson Wins on the Challenge Tour in 2000, image: europeantour.com

It was more of the same on the European Tour when he captured the 2001 Benson & Hedges International Open, but the 25-year old Stenson saw his game as still evolving and in need of adjustments to play in golf’s big leagues. His tinkering produced disastrous results. So bad in fact, that Stenson disappeared from golf, unable to even put a ball in play, and it took two years of work with a sports psychologist to repair the damage.

Stenson didn’t win again until late in 2004. He was a Top-10 performer and occasional winner on the European Tour, but his 30th birthday came and went without any ripples on the world golf stage. In 2006, Stenson played his way onto that year’s European Ryder Cup team where he performed well, and then he was a surprise winner in the 2007 WGC-Accenture Match Play Championship and joined the PGA Tour.

Stenson’s first win on tour was a big one – the Player’s Championship in 2009. But he was still most known for a shot played elsewhere in Florida at Doral that year. With his ball in the muck at the edge of a water hazard, Stenson shed everything but his briefs and his golf glove, waded into the lake, and blasted back onto the green grass.

Later that year, however, Stenson found himself in a hazard from which he could not extricate himself. He had reached World No. 4 when a Stenson sponsor, the World Financial Group, was torpedoed by the federal government for running a Ponzi scheme. Included in the pool of swindled money were about seven million of Stenson’s dollars, never to be seen again.

The resulting stress ate away at the outwardly-stoic Swede. He lost weight, his mechanics screwed up, and by 2012 Stenson woke up ranked World #230. He didn’t even qualify for any of the major tournaments, save for an invitation to the Masters. Most players never return to the upper echelon of golf from one career-threatening slump. Now Stenson was embroiled in a second, in his late thirties.

But Stenson, known as a trickster around clubhouses, displayed the same resiliency that earned him the nickname of “Iceman” back when he was toiling on the European minor league tours and indeed returned. He finished runner-up to Phil Mickelson at Muirfield in the 2013 Open Championship, and placed third at the PGA several weeks later. He stayed hot in the FedEx Cup events and won the Tour Championship. He then claimed the European Tour’s Race to Dubai, becoming the first player to pocket both titles in the same year. All told, Stenson won about $18 million in eleven weeks to polish off the 2013 campaign.

Stenson has built a reputation around golf as a consummate ball-striker who’s often betrayed by his putter inside ten feet. As a result, he hasn’t collected a great deal of hardware – only about a dozen titles in stroke play events around the world. But only two of those wins were by fewer than two strokes, an indication that when Stenson’s putter is working, other players tend to raise the white flag.