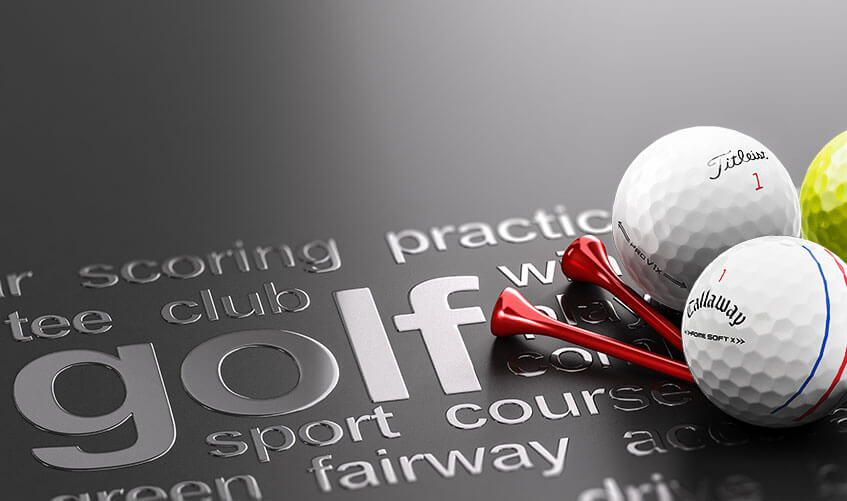 A Golf Glossary: Breaking Down the Most Common Golf Terms

Golf has a language all its own, with common words used uniquely and many Scottish terms that make up the complex terms we still use today. So if you are new to the game or want to brush up on your terminology, read more of our guide to golf. This is a golf glossary of some of the most common golf terms and definitions you would hear on the “links, with your foursome.” Keep reading for a glimpse of what that means; you’ll be talking like the pros in no time.

Ace is a term you probably didn’t know you already know. It’s a slang term for a ‘hole in one,’ which is when you hit your ball from the tee and land in the hole in one stroke.

Approach shots are short or medium shots that start at least 100 yards from the hole. The goal of any golfer’s approach shot is to hit the green.

Scoring a birdie means that the golfer comes in one stroke under the recommended par on a hole.

Opposite of the birdie, a bogie is when the golfer comes in one stroke over the recommended par on a hole.

The distance a ball travels from the initial impact all the way to hitting the ground is the carry.

A chip is a shorter shot with minimal loft from the green.

The ball’s compression refers to the resilience of the golf ball and how it performs.

Upon impact, the divot is the turf removed from the ground with the ball’s initial launch. Typically when a player swings, part of the club unearths some dirt as well.

An eagle is even better than a birdie. It is two strokes under the recommended par of a hole.

The shorter grass region of a hole that sits between the tee and the hole. Excluding the hazards and the rough around the hole. This is the playable course area.

The follow-through is the latter part of the golf swing or the swinging motion that completes the entire golf stroke. In other words, the whole movement that occurs after the impact.

The traditional warning that players shout to warn others of a potential incoming ball. This is to avoid anyone getting hit or injured on the course.

When players agree to give each other Mulligans, their opponent has the right to ask them to replay a shot during the game. This is the opposite of a mulligan.

This is the small, green area around the hole where players putt. This part of the course is kept very short and well-maintained.

A hook shot is where the ball curves powerfully from right to left and left to right if the player is left-handed.

The privilege of teeing off first on the next hole is given to the player scoring the lowest on the previous hole.

The hollow part of the clubhead where the shaft is attached. This is also sometimes known as the ‘neck.’

A lie is the position of the ball on the course. A good lie allows you to putt well, and a poor lie will make it more difficult for you to putt. A lie can also refer to the clubhead’s angle on the club’s shaft. Taller golfers tend to use clubs with an ‘upright lie,’ which makes the shaft more vertical, while shorter golfers use clubs with “flatter” lies (or regular lies) which place the clubhead further from the golfer’s body.

A traditional-style golf course. Located on coastal terrain, usually with dunes and very few trees, and exposed to the wind. The term originates from the Old English word ‘hlinc’ meaning rising ground or ridge, and refers to a sandy area along the coastline. Literally, it’s the area that “links” the mainland to the seashore. Authentic “links courses” can still be found in Scotland, Ireland and England, where the game of golf gets its roots.

A club’s loft is the angle between the clubface and the ground. The angle is measured in degrees and differs depending on each type of golf club.

In a friendly game, an opponent may permit one to replay one’s last shot. This is not allowed in competition. Also, this is something that is agreed upon before the start of the game.

This rule applies when courses like to keep carts off the fairway. Players must maintain a 90-degree angle from the cart path. To play from this location, take the cart path to a spot even with your ball and make a right-angle turn toward it. Especially crucial if conditions are wet.

This is the standard amount of strokes a player gets for each hole. Almost all of the holes are par 3, 4 or 5. However, recently newer courses are constructing longer par 6 holes as part of the course.

Extra strokes that are added to a player’s score for breaking the rules, losing a ball, going out of bounds, etc.

Another word for the flagstick. This is where you direct your aim when you are teeing off.

This shot is used to approach the green but has a shorter swing than a typical swing. It is a bit more lofted and has a longer swing than a chip shot.

The range is the area where golfers practice. Also referred to as the ‘Driving Range.’

The grass in the longer and thicker grassy area of each hole on the golf course. Generally, not as well-kept as the green.

A shot hit by the club’s hosel, causing the player’s ball to go sharply right. This has also been referred to as a ‘socket.’

When you hit a shot thin, it means your shot flew lower than usual and with little to no control.

A slice is a shot with an extreme curve to the right. The shape of the ball flight resembles a banana. The shot is usually caused by striking the ball with an open clubface and having an in-to-out swing path. This is a typical shot shape among beginners and high-handicappers.

A stroke is the forward swing of a golf club made by a player actively trying to strike the ball. Golfers use strokes to advance the ball around the golf course; each stroke is counted as part of a player’s score.

A thin shot falls somewhere between a top shot and a well-struck ball. The ball is hit low but not with enough force to make it airborne. This hit is a somewhat uncontrolled shot and can sometimes be destructive if players chip or pitch around the green.

When players hit the ball just over the center, causing it to dive down and roll rather than rise.

This is after a golf course’s 9th hole or the halfway point. It’s traditionally considered the place to ‘turn’ for home.

If a player can’t play a shot due to an obstruction on the course or ground conditions, they may drop the ball in a better position, which complies with the game’s rules, under a penalty.

Practice Makes Perfect, Even With Terminology

Although it may seem overwhelming initially, the rules, regulations and terminology may baffle certain players, especially ones just starting. However, with practice and some resources, players will incorporate these terms into their vocabulary in no time at all. With the proper knowledge, skills and resources, you can apply everything you have learned on the course. While some terms may drop off and get added to the game over time, these familiar terms are key phrases of the game. Add this list to your everyday golf phrases and learn golf’s core elements and history.